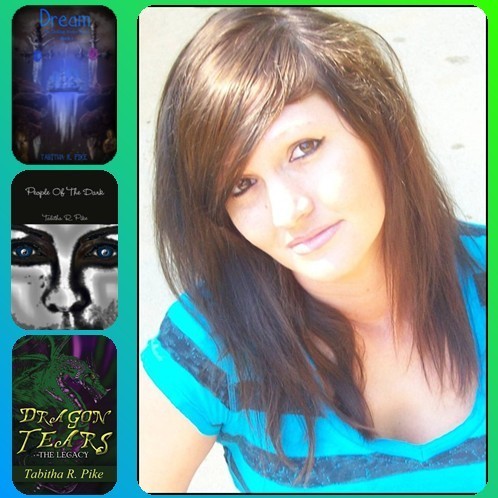 Tabitha R. Pike has not received any gifts yet

Thanks for stopping by. I write supernatural fantasy novels for both teens and adults, drink a lot of coffee, and I am convinced my neighbors are the true Illuminati, Aka: People of the Dark, and Aka: child of the Phoenix with supernatural powers, though I have not seen their eyes up close. I believe that if you listen closely you can hear the music in everything.

Tabitha R Pike resides in a quaint little valley between two towering mountains with her husband and three children. She spent five years living beside the Hills of Copper off Hwy 64 in the county she was originally born. Living in  Southern County of the great state of  Georgia and Tennessee she learned how to be an original artist of life. A couple of times she had a near death experiences. Once she realized that her dreams held meaning she used that understanding to make her life gold. Tabitha is the soon to be author of the New York Times bestselling Linking Stones series and The People of the Dark.

I've secretly wanted to leave my Mark on the World.

I often kept the desire secret, because I knew that it would be a challenge to leave behind a legacy for my decedents, and I didn't want people to think I was loco. As a kid, I lived in my head a lot, making up adventures, and sometimes sharing my imaginary games with my sisters. For as long as I can remember, I’ve always spent a huge portion of my free time daydreaming and making up imaginative stories. As I aged, those stories became more elaborate and compelling, and I decided that I wanted to share them with others. That was when I became serious about writing.
To leave my mark upon the world would be a dream come true. I just don't want to die first before my work is noticed. I want my work to live on even after I am gone such as all the great writers of times past;  William Shakesphere, Edgar Allen Poe, Mark Twain, Charles Dickens, Dean Koontz, Stephine Meyers, Brandon Mull, J.K Rowlings, Stephen King, Rachel Mead, Charlaine Harris, Karen Marie Moning, Rick Riordan, Christopher  Paolini,William P. Young, Janette Oke,  Ernest Hemingway, C.S. Lewis, H.G. Wells, Dr. Seuss, Plato, and Emily Dickinson.

When I started putting my imagination to paper.

Through high school and college I mostly practiced by writing poetry and short stories. After graduating in 2003,  I nearly lost interest in writing altogether because of personal factors in my life. Upon reuniting with a long lost friend, now my husband a fire sparked within me again and began writing my first book of poetry. I was rejected my times by agents and publishers before I was published. I then began writing my first novel “Dream” The first in the Linking Stones series. There also I was rejected many times by publishers and agents because no one was looking for that type of book so I self published my book and placed it on the market. My third novel “Dragon Tears” which was my first teen novel was picked up by a Publisher and was put on the market in 2011. I am now working on a new novel called “People of the Dark” which I hope to finish sometime this year.

I am now contentedly living toward my dream. Between writing and promoting, I work more hours in a week than I ever have, but I am passionate about my goals in life. I love my husband and kids more than words can say. I am relieved  doing what I adore most in this world being with my family and putting imagination into words.

To Contact Author Tabitha Pike please email her at  tabithapike@att.net

Books in the making

"People of The Dark"

Soulful Ink is a book of inspirational poetry. It is complied with poems about my faith, my family, my nation, my heritage and my love. It is my soul that you read; from the ink of my soul you see my heart. This is my second book, following my first book called The Burning Bush, which also is a book of poetry. You may ask why I have titled this book…
Continue The Burning Bush is a book of poetry. It is a part of my heart, mind, spirit, body, and soul. I started writing this book three years ago. I was writing to pour out part of myself and to allow myself freedom. If we bottle ourselves up we shall surely die. I needed these words to pour out of me. This book is about my life…
Continue "Dream" The Linking Stones Series
Two worlds collide, two warriors united, two hearts are joined in this magical tale of courage. A brave warrior from Scotland, and a Cherokee Indian Princess from undiscovered America set out to find the answer to the Dream that has plagued them since birth.  Both find a…
Continue 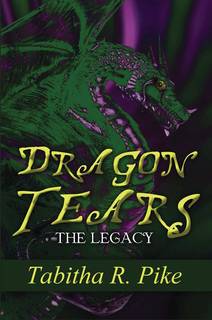 On an Ordinary day, when the Townsend siblings go to school, they get caught up in the lives of four mysterious strangers. They decide to investigate the strange situation by using their magical ability that they were born with.  While the Townsends hide within the shadow of the mysterious teen’s shadows they get swept back in time to play a crucial role in an ancient…

Tabitha, welcome aboard, …from The Chuck!
I write sci-fi novels filled with adventure, mystery, romance, drama, horror, and many more genres all mixed in... Sci-fi for everyone to enjoy. I'm also a published poet. When you have a moment, please check out my Authors page and a few of my videos and blogs I've recently added. Many of my blogs consist of free to read enjoyable sci-fi stories I plan to unite within a book. My newest sci-fi novel is 'They!',  which is related to the 1954 sci-fi classic movie, 'Them!'.

Nice to meet you Tabitha. :) Welcome aboard. I’ll look forward to getting to know you better.

Welcome to Authors.com Tabitha! It’s great to meet you. :) Would you mind dropping by this thread please and sharing how you found your way to us? It helps us all get to know each other better. :)

Hi Tabitha,  It's nice to make your acquaintance.  I see you have written two poetry books. I would love to read them.  I once lived in Ft. Smith Arkansas and loved going to Hot Spring on weekends.  I think the south is a very beautiful region--with valleys and mountains.  Well, hope to learn more about you.

Thank you Birgitta, I would send them to you by email if you would write a review for both of them. Absolutely free. You can email me at tabithapike@att.net

Looking for the Lie in Vendela Viva's Latest

Q & A with Kimberly Willis Holt

'Wintering' Is Painful, But Embracing The Cold Makes It Hurt Less

'Perestroika In Paris' Is A Cozy, Fairy-Tale Trot Through The City Of Lights

David Sedaris on a Career-Spanning Collection

Meritocracy, Silicon Valley and Other Letters to the Editor

Dolly Parton Likes to Read by the Fire in Her Pajamas

Coffee-Table Books to Give (and Get) This Season

Meet Chloe Gong, One of the Year’s Youngest Best-Selling Authors