Dave Watson has not received any gifts yet

If you have the time, please take a look at my 1st novel FULL CIRCLE. You can read the 1st chapter on Amazon. I would really appreciate peoples comments and feedback. 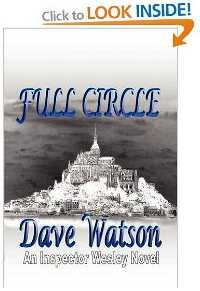 New kid on the block

I guess I'm the new kid on the block, all be it a 55 year old. I had my first murder mystery novel FULL CIRCLE published last September. Hopefully, the first of many. I'm looking forward to speaking with everyone, and looking at the depth of skills and expertise on board, I'm looking forward to learning a great deal more about writing.

Dave, welcome to authors.com  …from The Chuck!
I write sci-fi novels filled with adventure, mystery, romance, drama, horror, and comedy… Sci-fi for every human to enjoy. I'm also a published poet. When you have a few free moments, please check out my Authors page and a few of my videos and blogs I have recently added. Many of my blogs consist of free to read enjoyable sci-fi stories I plan to unite within a book titled: 'Epic Marvels. My newest sci-fi novel: 'They!', which is somewhat related to the 1954 sci-fi classic movie, 'Them!'.

Nice to meet you Dave. :) Welcome aboard. I’ll look forward to getting to know you better. You can post a sample book chapter in the Groups side here too.

How can I help, now you are on this ship?

You asked about characters and settings and description, I remember.

Welcome to Authors.com Dave! Lovely to meet you. It’s great to have you here. We’d love it if you could drop by this thread please and tell us all about how you found your way to Authors.com. :)

Like yourself I have finished my first novel and onto the second. Just waiting for the final copy-edits to come back from the first then, I need to think about publishing. I'm interested to note you went with Mirador. I've heard a lot about them but not had the opportunity to talk to someone who has used their services. Have you found them a good company to work with?