Q1: Thanks for participating in our Authors.com Spotlight Interview series! Please introduce yourself and your book to help our readers get to know you.
A: Thanks for having me. My name is Jeremy Vaeni. I’m fairly well known in ufology for exposing bad research practices and supporting those who, in my view, keep it honest. My new book, Urgency., is a real departure for me. It’s a book that isn’t meant to just be read. It’s here to fundamentally change the reader. It’s a spiritually transformative experience—or at least that’s its intention. So basically, I’m throwing caution—and all of my ufological street cred—to the wind here, because, as the title implies, transformation is a more pressing issue than reputation. 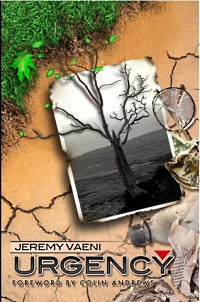 Q2: Please explain how you came to be a writer, what inspired you to write your book(s) and how long it took.
A: I’ve always been a writer. I wrote a book in high school and taught myself some basic English skills that way. If I overused a word, I’d look it up in the thesaurus and then look up those new words in the dictionary to make sure they meant exactly what I wanted them to mean. Pretty grueling stuff for a school kid, but I loved it. This new book took a while to write because I had originally written it as a sequel to my last, I Know Why The Aliens Don’t Land! When a friend looked at the first few chapters and saw I was essentially avoiding the larger spiritual picture to remain with the humorous tone of the sequel, I could read the disappointment on her face. She said, “We don’t have time for this. Write the book you need to write.” Or words to that effect. She was right. I was planning on writing this type of book eventually, but that discussion sped up the process. I’m really glad she kicked my butt on that.

Q3: What did you enjoy most about creating this book?
A. Saying things no one else has ever said before. I mean, we always hear that there’s nothing new to be said, just new ways of saying the same things over and over again—and to an extent that is true. But I’m confident there are a handful of insights into the human condition you have not read anywhere else. That excites me. And whittling giant concepts to their fine essence in a way that sounds deceivingly logical—I’m really glad to be able to share that gift, finally.

Q4: What facets of your life, both personal and professional, are woven into your book, if any?
A. Oh, it’s all personal. You cannot write this type of book with any authentic voice if you haven’t experienced the spiritual transformation I’m explaining. Still, I did throw a bone or two to the ufological crowd. Know your audience and all that. But I sincerely hope this transcends my usual audience. I would never have said anything so arrogant about my previous book, but… I think it’s important. This book feels important to me in a transpersonal way. Who knows, though? At the end of the day I’m a writer and so what else am I to say about my own work? It’s that or guzzle humble pills.

Q5. How did you get published?
A. I did the one thing I swore I would not: I self-published. I had an agent show it around to publishers and he got a lot of positive feedback. Unfortunately, there’s a glut of spirituality books out there so they’d have a tough time selling a book from a popular author let alone this guy. It was the most gratifying rejection experience of my life: “This is brilliant. Unfortunately….” A lot of that, which is always better than form letters and non-responses. It’s like these big publishers were pulling for me, they just weren’t about to risk their own money on me. So I decided to put it out there myself for the simple fact that—as I said—I think it’s important.

Q6: Did you have any surprises or hiccups along the way during the book writing and/or publishing process?
A. Well, like I said, this wasn’t even supposed to be Urgency. It was supposed to be The Skeleton Key To All Worlds—a sequel. So that’s a major hiccup. One fantastic surprise is that I gave it to author Colin Andrews for some feedback and he loved it so much he went ahead and wrote a Foreword to it! You can’t get a bigger endorsement than that, especially from a man who is as busy as he is.

Q7: What one thing did you wish you'd known before you started this project?
A. Ha. Ask me again in a few months after the reader reaction has had a chance to come in.


Q8: You're a fly on the wall when readers are discussing your book.  What would you hope to hear them say about it?
A. Nothing. A room full of smiles would say it all. If I hear from people I’ll know it failed as an experiment no matter how good it is as a book. It’s all about dissolving in silence. It’s a book of death. I’m here to kill you not improve you. If you got some self-improvement out of it, I don’t want to hear it. If you hated the book, that carries the same weight with me—even though one should feel more gratifying. I didn’t write this for compliments. I didn’t write it for myself at all.

Q9: Tell us one thing about you that most people don't know or would surprise them.
A. I have a girlfriend.

Q10: What single piece of advice would you give new authors?
A. Your work probably sucks, so let other people read it and don’t get mad when they give you negative feedback. You cannot write in a vacuum. Just because you think it’s brilliant doesn’t mean anything without feedback, because ultimately you’re writing to connect with an audience. You write for yourself, yes, but you also have to write with the reader in mind. Writers tend to exist too much in their own heads and fall in love with their words. That’s great if you’re keeping a journal or a diary. Not so helpful if you’re playing to an audience. Find people whose taste in the subject you’re writing about you trust and ask them to read it for honest feedback. And then you be honest enough to mean “honest feedback.” Don’t get defensive, or curl up into a ball all depressed, when the critics get critical. Put yourself out there. Be brave. Be vulnerable.

Q12:  Describe where you do most of your writing. What would I see if I was sitting beside you?
A. Wherever. Sometimes I’ll write in the park. Usually at my computer. I don’t have a laptop so I’m at a desk. It doesn’t matter—I’m not married to a “perfect setting.” But I refuse to write in a coffee house just to be seen. I guess that’s my only rule.

Q13: What's your motto or favorite quote you like to live by?
A. Nothing. Although in Urgency. I give the motto: “One eye open is still half asleep.”


Q14: Is there anything else you'd like to share with us in closing such as your website, an imminent book launch or what you're working on presently?
A. Urgency. launched on March 29th, 2011. So it’s hot off the press. It may be the last book I ever write. Here’s the thing: I had the big I AM enlightenment experience at the end of which I decided to come back to normal to write this. Well, as I said, I wrote it earlier than expected, so what happens next is anyone’s guess. I suspect I’m not going to remain the hypocrite I chose to be to get this on paper for much longer. What comes next? What happens when you live on a new stage of consciousness as opposed to visiting it as a state? I don’t know—which is why I put off moving there for… well… now. So I guess look for me to grow a really long, crappy beard and inhabit a cave on some mountaintop somewhere—I dunno. In the meantime, check out my podcast where I’m still fairly normal: www.paratopia.net.


Thanks for your time Jeremy! Please share this Authors.com Spotlight Interview with friends and fans by linking to it, Tweeting it, Digging it, sharing it on Facebook and generally shouting about it anywhere you can. Fellow members, please support Jeremy by doing the same. Comments and Likes are also most welcome.

Comment by SpotlightInterviews on April 28, 2011 at 7:57am
I enjoyed your interview very much, Jeremy. Thanks again for participating and good luck! How's the first month went?

Comment by Jeremy Vaeni on April 28, 2011 at 8:10pm
The first month went extremely well, thanks for asking. I have yet to dip my toes in the New Age pond, though, which is where I suspect I'll need to go to have longevity. The problem is, it's not a New Age book, it's just disguised as one. It'll be an interesting experiment to see if I can have the conversation I'd like to have with that crowd. To that end, I'm giving two online talks through the Learning Annex in late May. I'll have a better idea of how receptive folks are to my spiel then.

That's good news indeed. You may want to add your talks to our Events calendar here as well to let people know. :)

Great interview! Jeremy, you said this book took a while to write. How long was "a while"?

I find it really interesting that you wouldn't want to hear what people were saying about it. Really, truly, neither praise nor criticism? The curiosity would eat me alive.  What do you mean by it's a book of death?

Great questions. A while depends on how you're counting, because I took what would have been the second half of the sequel that never was and expanded upon it to make it Urgency. But even before that, I had these small notebooks full of the epiphanies that became the material of the book--which I didn't know I was going to use. So the sequence of events is: wrote notebooks full of epiphanies, started writing sequel, decided that the second half of it should be those epiphanies, finished that book, then ultimately scrapped the first half of it and reworked the second half into its own book.

If you add up all of that, it took several years to write. If you just start at reworking the sequel into the book it is now, it took from August of '09 until the week before publishing. (I was still tweaking it, if you can believe that!) So about 7 months.

To the other question, it's a book about ego death--dying while alive and what happens next and why. The "enlightenment" experience, essentially. So if I get feedback about it, that means the experimental aspect of the book didn't work for those people. If it had, they'd have immediately understood why not to communicate it.

It's all explained in the book, actually. Transparency is key. Maybe I should have called it Transparency.

Comment by Jeremy Vaeni on May 17, 2011 at 2:49am
Just as an FYI to anyone who is interested, Urgency. is now available on the Kindle and Nook.