First off, I guess I should apologize for the disappearance act I pulled there. I wasn't feeling all like myself the last few days (more like last few weeks), but I decided that today I'd get up and get some work done rather then sit around and do nothing, which got boring pretty quickly. I've gotten about 6 more pages written for Shadows and am currently working on the first Chapter, which I believe is still nameless, but I'll share a little bit from it, probably my favourite part as of yet:

Fortunately the beach was close to the group’s campsite and they didn’t need to walk very far and listen to Cindi complain, until they arrived on the wide open sandy dunes. The dirt pathway that led over the last hill slowly turned to sand as the grass grew more and more spread out until it was gone completely. Cindi was the first in the water, not even bothering to help the rest of the group set up the umbrellas. Leaving her pink flip flops behind along with her pink tank top, she ran straight into the water and dove under. “Where’s the umbrella going?” Blaine asked as he looked around the large empty area they stood in. The large umbrella was over his shoulder, but he didn’t seem to notice it too much.
“Anywhere is fine, we’ll set up under it,” Mr. Cartell responded as he dropped the cooler he had been carrying with a huff. Before Blaine had even set up the umbrella Cindi was out of the water and ringing out her hair.
“Hey, Blaine, come in the water, its great!” she exclaimed. Her top was the same colour as the tank top and the mini-skirt she had been wearing previously seemed to be part of the bathing suit as she hadn’t bothered to change out of it.
“Can’t you see I’m busy?” Blaine asked as he stabbed the end of the umbrella into the sand before opening it up, “Good?” he asked as he looked over to Mr. Cartell.
“You’re done, let’s go!” she cried as she wrapped her arms around one of his and attempted to drag him into the water.
“Thanks, Blaine, I’ve got it,” Mr. Cartell said as he pushed the cooler under the umbrella and set up his beach chair next to it before taking a seat.
“What’s the big hurry?” Blaine asked as he pulled off his shirt and threw it behind him, not caring where it landed.
“I want to show you something!” Cindi answered as she rubbed Blaine’s chest with a innocent smile on her face.
“Heads up!” John shouted as he hurled the football through the air toward Blaine and Cindi. Blaine immediately rotated as he heard John’s voice and caught the football. John pulled his shirt off and ran into the water and tackled Blaine, recovered the football, and took off toward the deeper water.
“A little warning!” Blaine shouted as he got to his feet and chased after John, ignoring Cindi once again.
“You don’t get warnings in football, you’ve always got to be on your toes,” John shouted over his shoulder as he put the ball under his arm and dove into the water. Cindi stood where she had been abandoned and watched the two fight over the football and imagined what it would be like if they were fighting over her and not some stupid pigskin ball.
Madison placed her black beach chair out from the umbrella in the sun and pulled off her black top and hung it over the back of the chair. “What’s that?” Mr. Cartell asked as he caught a glimpse of something on Madison’s back. Madison immediately turned to face Mr. Cartell so he couldn’t see her back. “Is that a tattoo?” he asked.
“You can’t tell my parents, if they find out they’ll kill me!” Madison complained as she loosened up slightly and turned around so he could see the tattoo. A large black and blue flower was inked just above her waist.
“Lotus?” Mr. Cartell asked, “When did you get it?”
“A few years ago when I was still seeing Marcus,” Madison answered as she turned to face her teacher again, “That was what he used to call me until he dumped me a week after I got this…” she trailed off as she wiggled her black pants off and hung them over her chair as well.
“Don’t worry about it, I won’t tell your parents, but it looks good,” Mr. Cartell said with a smile on his face as he opened a bottle of Sprite and took a sip. Madison smiled before making her way into the water.
“Wow, Madison, you’re smoking hot when you’re not wearing all that Goth s***,” complimented Cindi as Madison walked past her. “Why do you wear that stuff anyway? If you just showed a little skin you could have any guy you wanted!” she added as she walked next to Madison now. “I hear John’s single,” she added with a soft laugh as she wrapped her arm around Madison’s and walked with her.
“I thought you had your eye on him, or were you eye humping Blaine?” Madison responded as she pulled her arm free and dove into the water. 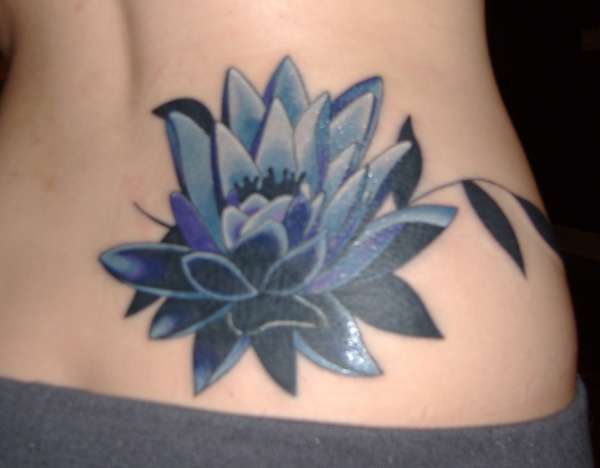 This is what I imagined her tattoo looking like, possibly a bit smaller, but this was the coolest looking one I could find that looked the closest to what I had in mind... Now, I don't know if there's any mistakes in this passage, if there is, and you spot them, please, comment and let me know. I tried my best to edit it myself, but as I'm sure you're all aware of, we miss the most common mistakes when we read over our own work... My friend normally edits it for me, but the only thing he found wrong with this entire passage was: John pulled his shirt off and ran into the water and tackled Blaine, recovered the football, and took off toward the deeper water. So if you find anything else wrong with this passage, I'd appreciate it if you could point it out to me. =D

On an added note, I'm trying out that yWriter 5 Program. So far I'm enjoying it a little more then just keeping point form notes saved separately as .txt documents that I always forget to open and always forget the saved location.

Comment by scribbler on October 9, 2009 at 9:34pm
That's one cool looking tattoo! Very good piece there Andrew. I don't see anything I'd suggest needed changing apart from that one line. It's too long. How about breaking it in two? Water is used twice as well. I would change one to something else like waves. This is a suggestion.

Casting his shirt aside, John ran into the waves and tackled Blaine. Waving the recovered football in triumph, he took off towards deeper water.

Comment by Kay Elizabeth on October 11, 2009 at 12:12am
Good to see you came back Andrew. I like your piece! Something I noticed is your use of "as". I think it's something you need to be conscious of. I used to do that myself, which is why I saw it.

Sentences can get very long when "as" is used often. Short sentences can have more impact and varying lengths add another dimension to your writing. I would suggest you mix and match a bit more. This small section shows what I'm rambling about. :)

“Can’t you see I’m busy?” Blaine asked as he stabbed the end of the umbrella into the sand before opening it up, “Good?” he asked as he looked over to Mr. Cartell.
“You’re done, let’s go!” she cried as she wrapped her arms around one of his and attempted to drag him into the water.
“Thanks, Blaine, I’ve got it,” Mr. Cartell said as he pushed the cooler under the umbrella and set up his beach chair next to it before taking a seat."

You can substitute "as he/she ( + whatever action they were taking)" with the active verb, add one word where you have a handful and change sentence length. For example, looking at the first sentence it could instead be put like this:

“Can’t you see I’m busy?” Blaine asked, stabbing the end of the unopened umbrella into the sand. He looked over at Mr. Cartell. “Good?” he asked.

Same meaning, and tighter writing imho. You get the picture. :) Thank you for asking for input, Andrew. Take it or leave it of course!

Comment by Andrew Kunz on October 11, 2009 at 2:17am
Thanks a lot, to both of you. I took your example Scribbler and replaced what I had previously with it and... I'd have to make a lot of editing to get rid of the "as" problem. I do hate to use it and I know I use it way too much, but when I'm writing it I can't think of something else to put; I'm so fixed on my thoughts on what I'm doing. However, looking over what I've got now, I can actually see what you're talking about and am going to try my hardest to reduce the amount that I do it. Thanks a lot for the advice! =D and hopefully the next bit that I post up is better.

Comment by Kay Elizabeth on October 12, 2009 at 7:05am
You're very welcome Andrew and as I said I did it myself before and have never quit the habit completely. As is my favorite word in first drafts LOL. I know I need to go back over anything I do and look for it though and that doesn't bother me. I use "as" first time round because that's the fastest way I get the idea down. Tweaking can always be done later. Everything I do gets rewritten somehow, trust me.

Interviewer: How much rewriting do you do? Hemingway: It depends. I rewrote the ending of Farewell to Arms, the last page of it, 39 times before I was satisfied. Interviewer: Was there some technical problem there? What was it that had stumped you?
Hemingway: Getting the words right.
(Ernest Hemingway, "The Art of Fiction," The Paris Review Interview, 1956)

Q & A with Candace Fleming

In 'Sexual Citizens,' Students Open Up About Sex, Power And Assault On Campus

Charles Yu Loves Reading With His Children. Don’t Tell Them.

Before Michael B. Jordan Played Him in ‘Just Mercy,’ Bryan Stevenson Was a Kid Who Loved to Read