a pinch of darkness2

kara looked around in the acid forest and realized Falcon was gone. DAMN, she lost him, again. when he finds her, he's gonna be mad as hell. she knew he has a bad temper. she walked through the trees until she saw him sitting near the pond of Blood.

what, no fit, no yelling. did their first kiss really change the way Falcon was.

she looked at him and caught his eye, noticing he was mad, just not at her.

A pinch of darkness.

"Don't ever do that again, you understand me?"

Kara didn't know what to say, she felt safe with Falcon, but all she ever do when she trys to help is piss him off.

She stare in his sliver eyes for a long time before she turned around and walked away from him, tears burning in her…

A bit about me and my book. Plus a Youtube video!

I hope we are all well. Since this is a place to talk about anything at all. I would like to share with you all my video a dear friend did for me on Youtube. It is about my upcoming crime novel ( yet to be completed) but already is creating a buzz online and off line.

I even have people making t shirts of the front cover of my work.
I hope my book goes well as well as all of your endeavours in life. …

my first and favorite story.

Hi, this is my first time here and I love, I would like to share some of my first story with you called," Shadow's heart at stone."

Shadow sat on his bed, his face masked. His golden, brown, crinkled hair…

JESUS, THE SAVIOR OF OUR SOULS AND ECONOMY

By not celebrating Christmas would send this economy into a tail spin.  Everybody would be affected- from Taxi cab drivers to baby sitters, airlines, hotels, gas stations, etc.  I cannot think of any industry that would not be affected.  Even China would suffer. Just think if all the Christians just decided to not buy gifts, cards, or candy at Christmas.  I bet a lot of Jewish retailers would convert to Christianity.  Everybody would be once again proclaiming Merry Christmas again.  Large…

If you need any book Formatting or Cover Design, I work with Quark, and all Adobe Software.

All types of Books, Logos, Websites.

I would like a chance to quote you a price.

On the Edge of a Great Distance

Excerpt from my book

"He was dead still. I could see beads of sweat forming on his forehead. His eyes turned to look at me as he held his finger to his mouth. That was a sign to be quiet. I really did not like the look on his face.

Then I heard it. The shuffle of dragon feet. It was not a small one. A shadow loomed over the shells. I saw the dragon's tail slither silently near me. The black scales glistened in the sunlight. I heard a soft thud as the shadow lowered. The dragon had…

The English language has many confusing word pairs, those word pairs that make people stop and ask, “Is it this word or that word? Which word do I use?”

Writing, of any type, is for communication. When you use the correct word, you can accurately communicate your ideas. On the other hand, if you use the wrong word, you risk communicating the wrong idea, and you risk losing credibility with your reader, whether your reader is a potential client, a professor, a publisher, or a visitor… Continue

I dont know what to name it!! But Hey!

There was a cammanding "no" in her yell

a time stopping response to a silent threat

A quiet pressure against her body

she so loudly disagrees with

words only she can hear

things that force her

A mere line that can blanken her eyes

and see things that don't exist

"No"  still ringing from her lips

Its been a long…

Take a pause and introspect yourself

If there be a classification for expose` I would epitomize this Genre.

This exposing is of ourselves, who we are and our actions , the decisions

to engage in games of delight and high adventure to shear stupidity.

Who am I ? I am a kook , that strange eccentic whom most would pass

off as " He is a nut but harmless ". Some would brand me as a type of

Psychic . But I have developed an ability to just know things and a

Hello fellow delvers into the world of publishing! Authors, editors, illustrators, publishers, all of us must be just a touch insane part of the time. Myself, I started doing short stories and bad show knock-offs at the tender aged of 13 or so ("Man From Uncle" if that ages me) and science fiction short stories. Late rin life at about age 30 or so I actually published a couple of short stories in a regional called "Genre' Sampler" and then started doing technical articles, first in nuclear…

Diving into the Guest Blogging Pool: Part I

Guest posting on blogs is a wonderful way to draw attention to yourself, your writing and your book(s).
Strangely, I find some authors are quite reticent about guest blogging. What? Lovers of the craft not wanting to write? I was intrigued. When I dug deeper to find out why, again and again I heard the same reasons:

Books Are Good For the Writer's Soul

After losing my first wife to cancer the world seemed to be an alien place. The couples we knew now longer were available, the places we used to go were now off limits for my heart, and the things we shared no longer seemed important.

One day, I decided to go back to something I used to do many years ago. Write!

Since 1999 I have written close to 400 short stories and poems, been involved with couple of small newspapers, and have published seven 3-5 year old…

My son had to display books and make a poster of his favorite Author, so he wrote about me. He was so proud when I entered the room. Being a Children's Author has more rewards when I can relate to my children and they are proud of me. I love reading!  All kinds.  I have the best job in the world.  Voice transcribing for authors and inspiring authors.  So bring it on.  I would love to help out anyone!

Well here are pics of my characters: This is Ash, a x-blackblood. Boy. 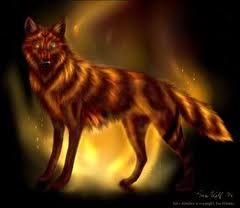 This is Blaze, Flare's older brother.…

My third book was inspired to me by Warriors. Both books, mine and Erin Hunter's, are about feral cats. I based my story on basically 2 decade spilt from where I'm writing and where they left off. Here it is:

My second book is one straight from my imagination. IT is also the only book with a name, Flare's Story. It is about wolves. Here it is:

I was born a week ago into my family. My twin brother, Flame, is right next to me. It is night. I wake Flame up. I point towards the opening of the den. Flame stands up. We walk outside trying not to wake my family of fifteen. I walk by Peanut. He was the runt of his litter. He coughs as I walk…

How Winston Churchill Pulled Britain Through The Early Years Of WWII

Author Interview: 'They Were Soldiers'

Meredith Talusan On Her New Memoir, Life As A Child Star, Relationship With Parents

Immigration Reform, Past and Present

With Museums Closed, Coffee-Table Books Bring the Art to You