Uncommon Grace: Saved for a Purpose 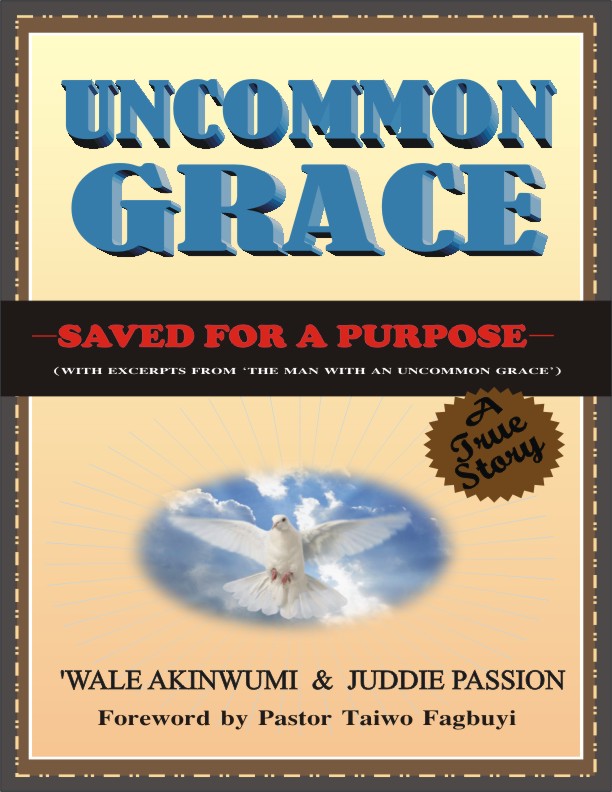 This is a true story of unusual grace, extraordinary mercy and undiluted faith. It was an uncommon grace, a rare favor, an unexplainable mercy and blessing that transcends human reasoning. It was not an everyday grace and was not for everyone; it was just for a chosen, blessed, special and privileged young man. He came face-to-face with death on that fateful day in October, 2002. In this simple, short and inspiring book, 'Wale Akinwumi and Juddie Passion reveal the faithfulness and unparalleled love of the purpose driven God; His abundant mercies and uncommon grace.

In this simple, short and inspiring book, 'Wale Akinwumi and Juddie Passion reveal the faithfulness and unparalleled love of the purpose driven God; His abundant mercies and uncommon grace.

This is the true story of a young man who came face to face with death in a fatal auto accident that claimed four lives; he died twice and was raised by the power and grace of the Holy Spirit. A man full of uncommon grace; he went down the valley of the shadow of death and feared no evil, had his skull fractured into a gully six inches from the frontal bone of his forehead to the parietal bone across the suture and along the superior line of his head.

The gully on his head was about four to five inches deep and miraculously had no injury to his brain. The open wound had so many pieces of broken metal that kept the doctors wondering why this man should live after all.

Doctors were more shocked that this man still had enough blood running in his veins and needed no transfusion for surgery after bleeding continuously from the head for more than four hours.

What then can we say to these; other than that he is truly a man with an uncommon grace who was saved for a purpose by the God of purpose.
UNCOMMON GRACE: SAVED FOR A PURPOSE ON AMAZON
MY PROFILE ON AMAZON

Poetry Challenge: Honor MLK By Describing How You Dream A World