Monday’s Child is published by Books We Love Inc. To take advantage the special offer of 25% off please log into https://www.smashwords.com and enter the coupon  KU73H

“Love, despair and renewed hope amid the gaiety and anxiety in Brussels before Napoleon’s defeat at the Battle of Wate

Five out of Five Star Review

Everything for the Regency addict here, with a heroine of great beauty but small fortune, all the strategies required for keeping one's place in the "ton," and plenty of interfering relatives. Taking it a little further afield than Jane Austen did, this story is set in 1815 Brussels where all the eligible young men are soldiers in Wellington's army, awaiting an attack by Napoleon. Despite the wartime tension, there's still plenty of time for balls, visiting, and morning gallops. The author knows her stuff--from clothes, to the many strictures of proper behaviour, which seem to us today as limiting as the ladies' underwear. Not only the detail but dialogue too shows a lively understanding of the period; I didn't see a single teacup laid out of place. While this book is a Regency delight, it's no fantasy confection. Class differences and gender relationships are portrayed realistically, sometimes jarringly so, with no candy-coating. I was particularly pleased by the marital choice made by Monday's Child--aptly named "Helen." It left me with no doubt about her HEA.

Five out of Five star review

Ms. Morris employs her extensive knowledge of the Napoleonic era while setting her characters against the backdrop of the Battle of Waterloo, bringing to life the sense of urgency of impending battle; the fragility of human desires against the prospect of imminent death. With masterly historical detail she creates a world of glittering ballrooms and parties, where 18-yearold, Helen Whitley, an accomplished artist, awaits her own life to begin, while capturing on canvas a society intent on enjoying themselves despite the underlying fear caused by Napoleon’s escape from exile in Elba. 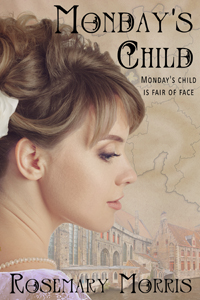 Fishing for a Better Future

The Color of Law: PW Talks with Wanda M. Morris

“A World Beneath This One”: PW Talks with Cadwell Turnbull

'Bronzeville' Author Discusses The Dualities Of 'Race, Fate, And Sisterhood'

Was Occupy Wall Street the ‘Beginning of the Beginning’?

New in Paperback: ‘Red Comet: The Short Life and Blazing Art of Sylvia Plath’ and ‘Sisters’

Afghanistan, a Double Bind and Other Letters to the Editor

Thomas Mann on the Artist vs. the State

Kate DiCamillo’s New Novel, About a Girl Who Would Be King