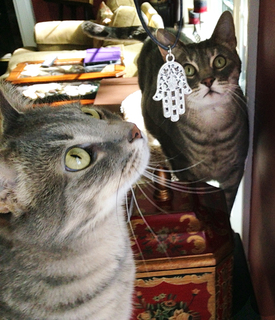 Cats have long been associated with the paranormal. One might first think of them as feline familiars to witches, but that is so not the beginning or end of their story. In Japan, myth says cats turn into super spirits when they die. Another culture believes cats routinely accomplish astral travel even in life. The Ancient Egyptians basically deified them.

And, of course, everybody knows cats can see ghosts.

​​Now, I don’t know what all this means for me. Even though I have penned a paranormal romance, I haven’t suspected my boys, Buck and Bozo, of having particularly paranormal aspects to their character. I’ve just adored the twin tabbies for their mystery and “inscrutability”—well, that, and the fact their purring is better than a month’s worth of therapy. Besides, they really love me back, and such reciprocated devotion is a true mark of a human’s worth as any cat lover will tell you.

Yet, I realize now that Buck and Bozo are not just blessings but curses too. Paranormally (at least to me) their cat hair seems to be found on every surface and in every corner of the house regardless of how often I clean or how often I groom their coats. Then there’s the possibility the boys are secretly attempting arcane ritual of some kind that will cause me to self-combust. They do this by joining me in my chair for some late night TV—one in my lap and the other draped over my legs—where they emit a gazillion BTUs of body heat. Regardless of the season they leave me panting and sweating like a jungle explorer down with malaria.

Next comes The Look. At any time one or the other of them is staring at me, all but expressionless yet with something in their eyes that leaves me wondering. Are they deciding which bits of me to devour first should I expire in the night or are they telegraphing their preparedness to defend me with claws and teeth against all comers?

They could just be watching to see if I’m going anywhere near their food bowls, but...

Unfortunately, my Khamsa necklace, which is designed to ward off curses as referenced in my novel Curse Me Not, seems to have no effect. On the contrary, Buck and Bozo simply bat the necklace around as though its power is laughably impotent against their much stronger paranormal talent.

Which is probably the case, Lord love ‘em.

'The Stakes Are Far Higher Than They've Ever Been': Trump's Niece Pens Tell-All

'We've Got To Learn From Our History,' 'Demagogue' Author Warns

‘Notes on a Silencing,’ by Lacy Crawford: An Excerpt

“The Beauty in Breaking,” by Michele Harper: An Excerpt

‘Burning Down the House,’ by Julian E. Zelizer: An Excerpt

Book Review: ‘Notes on a Silencing,’ by Lacy Crawford

Cavorting in Hot Springs, Ark., During Its Sin-Soaked Heyday

A Lakeside Family Vacation Goes Awry in This Debut Novel