Another Fun Night With the Guild

As a newbie author, I recently realized how important—and fun!—it was to be a member of the Knoxville Writers Guild and the guild’s Sci-Fi/Fantasy Writers’ Group. I can’t believe how much I’ve learned over the past year and how much of what I’ve learned has affected my writing. 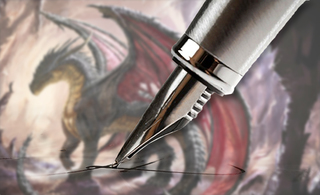 Here’s a case in point. The group’s latest “flash fiction” experiment was assigned to us as follows:  write 500-1000 words composed solely of dialogue where the scene either begins with or features one of these statements: "No matter what happens, don't drink the water."; "We're not asking the dragon for directions"; "Forget the fish. We need to leave. Now."; "This is all a joke. Isn't it?"

What a challenge this turned out to be. Granted, I fudged on the dialogue-only part once at the very end. Still, this was not just a lesson in dialogue. It was a true test of “showing, not telling”—that most difficult of fiction-writing maxims.

See if you think I “showed the story” well enough with dialogue alone.

"Forget the fish. We need to leave. Now."

“We don’t have time to stop and let you chop it out of that frozen stream, Ooda Loop. The snow is starting to cover the trail. Cut the crap and keep moving. Besides, I can’t feel my paws.”

“But I’m hungry. Damn, and fangtooths are so good eaten cold.”

“Shut up, Ooda. You have the fur of a woolly snuffle and the foot-pads to match. You wouldn’t freeze between a yeti’s legs. I, on the other hand, am just hairy. Besides human skin is worthless against the cold. And I was so proud of this man suit when I bought it back in town. Have you ever seen such a sophisticated shade of pink? It’ll be ruined by the time we find the wizard’s house. I keep sinking in the snow with each step.”

“Sorry, Slapnutt. I know you’re making this journey for my sake. How much further do you think we have to go?”

“Can’t be much further. The innkeeper said to go ten giant steps east and take a left at the sneezewort tree, and then only another two giant steps. We made the turn a while ago. Surely we’ll pass the Lake of Scorn soon. Then we’ll be home free.”

“Yeah, but not to question your lead, ‘cause you’re doing a bang-up job, Slapnutt, but that didn’t look like what I remembered a sneezewort tree looked like. It looked more like a fartwort tree. They do look a lot alike, sneezes and farts, but—“

“It had to be a sneezewort.”

“That wizard better know what he’s doing or this will all be for nothing.”

“Oh, he will, he will. Why the innkeeper swore his ailment was gone after just one twitch of the warlock’s wand. One twitch. He’s bound to be able to fix my wiggle-ding.”

“Didn’t I warn you not to eat those horn peppers?”

“Not lost. Maybe turned around a little. That’s all. Hey, what’s that smell?”

“Maybe the dragon can help us.”

“Dragons aren’t friendly on the best of days. In this cold, it’s got to be really pissed.”

“Speaking of piss, my wiggle-ding is really starting to smart.”

"Forget it. We're not asking the dragon for directions."

“And why not?” a voice suddenly boomed from somewhere off in the snow. “A smarting wiggle-ding is not something to fool around with. Tell you what. You boys find me something tasty to eat—a fangfish, for instance, would hit the spot—and maybe I’ll help.”