An Inside look at S.L. Schmitz,author of the new Cliffhanger Series with Trestle Press; "MIna's Daughter..The Harker Chronicles"

I love S.L. Schmitz's work! She has a new digital short story series with Trestle Press called "Mina's Daughter..The Harker Chronicles". Volume one just released and she will have a new installment in the series on the 15th of each month. If you enjoy a well told tale or are into Vampires, Werewolves and Steampunk, this is it for you.Grab it and go for the ride.Here is a Q&A for you to get a better feel for the author:

1) Let it Bleed, I feel, can be read on two levels. Am I off-mark suggesting the story can be read both ways? Simultaneously?

It would be interesting to hear more about your thoughts on this, Nerine. But I agree that there is a high note and an undertone to the story. On one level, this is a modern day Joseph and Mary story with a punk rock soundtrack, complete with a savior and a martyr and a villain. It is raw and brutal and hostile, intermingling the psychotic thought processes of the Dead Girl with the apocalyptic mission of mercenary angels. Then there is the undertone, humming deep beneath the epidermis of the main story… a tale of demons and monsters lurking under the impassive eye of a ruling god. Not sure which is more blasphemous – suggesting that God could be so taken with one of His earliest creations, the mythical Sophia, that he just lets her run around causing chaos wherever she goes, or the idea that God is not really in control of all of the worlds in the Universe.

2) Were you at all influenced by Allen Ginsberg's Howl? Are there any other authors who've influenced your style or who are inspirational?

“Howl” is brilliant – one of the greatest opening lines ever written. I have to admit that I was influenced by Jack Kerouac, Henry Miller, Charles Bukowski and all the rest of the boys on the electric acid kool-aid bus. But I also have to give props to Anais Nin and Flannery O’Conner. Throw a little Patti Smith and Lydia Lunch/Exene Cervenka in there, and I guess I ended up with a whole liturgy of 20th century gospels to choose from. Then there are the poetry slams from the 80’s and 90’s – I still have old cassette tapes that I bought for $5 at clubs in New York and Kansas City of poets with their voices rising and falling among cheering crowds. Words are magic, and can weave spells. I tried to capture some of that magical imagery in “Let It Bleed”; to raise the lead singer of a band into mythological godhood based on the adoration of Generation X and the powers of the new Madonna.

3) Why a Goth theme? Were there any albums you had on repeat while you wrote?

I grew up in the suburbs right outside of Chicago. The Goth scene was the coolest, darkest, most absurdly underground and desirable music in the whole world. Back then, it was all about voice, image, and tone. And make up. Lots and lots of black eye makeup. There was the independent Blue Skies Record store in Naperville and Wax Trax in downtown Chicago – places where you could take $50 and walk out of the store with 10 new LPs or records. We would just walk in and buy the albums of bands we had never heard of, but had the best names. Back before Jarboe was a part of the Swans, Michael Gira was putting out the most hypnotic music with a hallucinatory bass line that just altered brainwaves. We loved Bauhaus and Ministry, and as the 80’s progressed we loved the Cure and Siouxsie and Morrissey. Don’t forget Ska and the influence of the Dead Kennedys! Once upon a time, that stuff was revolutionary. It seems almost quaint now, but back in the day it was uber-alternative to like these bands, and it shaped me into the person I am today.

4) Why names such as Razorblade Boy, Dolphin Boy or the Dead Girl?

I did a guest blog about this awhile ago, and I proudly but hesitantly admitted that I committed an author’s sin by not really naming my main characters. There was this primal need in me to keep the characters in a constant state of turmoil, leave them unnamed so that just their horrible, scandalous, visionary, beautifully decadent personalities could shine through. I think it keeps the reader’s guessing – if you look very very closely, I have detailed their proper names once or twice within the context of the 340 page novel – but it’s kind of like an Easter egg to find them. Isn’t the “Razorblade Boy” a great name? It has so many connotations – he is so jagged and sharp and self-important that he is unapproachable, and yet he is sorrowful and causes pain. I tried to match the name with the essence of the character, in a very Andy Warhol/John Waters kind of way. I think it works, because the novel is contradictory. Is everyone totally insane and hallucinating, or could this story really happen?

5) How long did it take you to write the story, and how challenging was the editing process?

LOL – this story took a really, really long time to get on paper. I am a painstakingly slow writer and I do constant re-writes. I am grateful to my beta readers, and to my actual editors who took a deep breath and went in with red pens poised. Could this book have been leaner and meaner, harder and more fast-paced? Of course. But the editors and beta readers viewed it as a symphony that starts out slow and then builds. You have to move with it, and not become overwhelmed by vocabulary or obscure references. It will all fall together in the end.

6) Are you going to continue in a similar vein with your next novel?

I have promised myself and Dark Continents Publishing, Inc., that my next two featured novels will be written like a normal human being. LOL! But seriously – I am trying to grow as a writer, and although Let It Bleed is written in a deeply stream-of-consciousness way of speaking and implying, I am seeking other, more accessible voices for future publications.

7) Care to spill the beans about any upcoming stories?

“The Seven Ravens” will be published in early 2012, and it a re-interpretation of a Grimm’s Fairy Tale. There will be another novel coming out, hopefully by end of spring 2012, that will be called “Crunchbone”, the story of werewolves and a doomed wedding party during turn-of-the-century Russia. I will also have a story published in “P is For Phobia”, an anthology being edited by Dean M. Drinkel for Dark Continents Publishing. 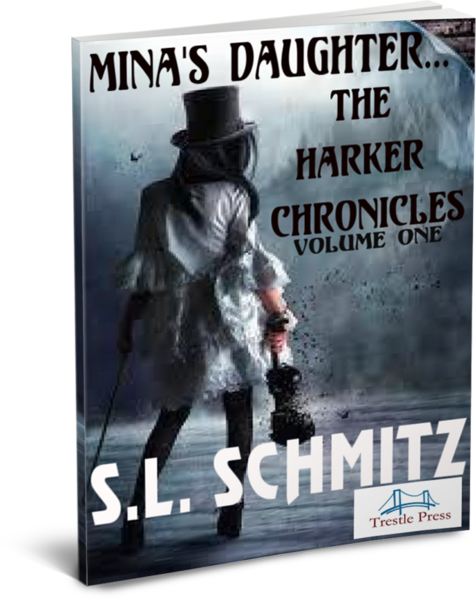