With a Foreword by... 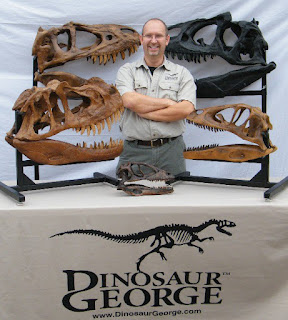 I am very excited by this! "Dinosaur George" has written the foreword for The Secret Queen, which will be available in about 75 days.

This is the first of my novels to have a foreword and who better since the third book of The Empyrical Tales has dinosaurs in it.

I contacted Mr. Blasing a while back with the aim of him verifying some of my dinosaur facts. When I go into classrooms, I tell the students that a huge part of writing fiction is doing the research. My research led me to "Dinosaur George". He was already a household name to us, having seen him on various dino-documentaries. Despite his busy schedule, he read my manuscript and commented in a surprisingly short amount of time. I pressed my luck further and asked if he would be willing to write the foreword. He said he would "love to". I gave him the opportunity to readThe Fourth Queen and The Lost Queen. He says he enjoyed the whole series, but likes The Secret Queen best.

I will say this about "Dinosaur George": rarely have I met someone so kind and supportive. He is a great person with a passion for teaching young people. My son and I were already fans of his, and I am honored that he calls himself my fan!

Here is a little about "Dinosaur George" from his website (www.dinosaurgeorge.com):

“Dinosaur George” Blasing is a self taught paleontologist and animal behaviorist with more than 35 years of study and research. Blasing is a public speaker, writer and television personality who has performed live to over 1 million people and has lectured in over 2800 museums, schools and public events. He has volunteered his time to make hundreds of appearances in children’s hospitals, Boys and Girls Clubs, YMCA’s and Boys and Girls Scouting events.

In 2007 he co-created, wrote and hosted a 12 part series for The History Channel called Jurassic Fight Club and is currently involved in the creation of a several new television projects.

In 2009, he was named as a member of the Board of Directors for the Proctor Museum of Natural History in Houston Texas.

In 2010, he was honored with an appointment as “Guest Curator of Paleontology” for the Witte Museum, located in San Antonio.

To promote the importance of reading, Dinosaur George set off on a state wide tour of Texas libraries during the summer of 2011. He performed in 67 libraries and spoke to nearly 10,000 children and adults.

With his vast knowledge of prehistoric life, expertise in animal behaviors, and powerful on camera presence, Dinosaur George is a highly respected and sought after public figure who shares his love of “all things prehistoric” with throngs of enthusiastic fans.

The Empyrical Tales Book III: The Secret Queen will be available from Comfort Publishing on June 1, 2012. You can pre-order it now on Amazon.com here: http://tinyurl.com/7b7uwdo

New Audiobooks, From Thomas Cromwell to the World of Darkness

‘Every Work of American Literature Is About Race’: Writers on How We Got Here