Thinking Outside the Box But Within the Big Picture 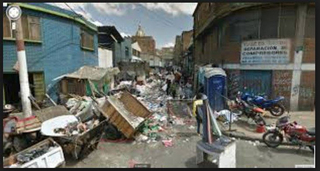 As a member of the Knoxville Writers Guild, and in particular of the Guild’s Sci-Fi/Fantasy Writers’ Group, I recently joined in on a writing experiment that was downright fun. The idea was that each of us write a short ditty (called “flash writing”) using a photo as a writing prompt.

We were given several stock photos to choose from: a couple of samurais fighting with swords, a hovering spaceship, robots walking down a street, a field of sheep near a fairy castle. The one I chose showed a trashed, abandoned street with a post-apocalypse reek. (I’m a big apocalypse junkie, by the way. Walking Dead, Mad Max, The Road, The Stand…all that stuff.)

It took me no time at all to finish writing because I knew right away what approach to take. Here’s what I “flashed”:

I really needed to pee.

Don’t snicker. You arrive in a new city, empty handed except for a half-eaten box of vanilla wafers and a water bottle long since drained, and tell me your nerves wouldn’t have you dying to pee too. The fact I had only one round left in my 9 mm didn’t help. At least I had Sheila, my trusty crowbar.

Except she probably didn’t need to pee, and I did.

Yep, I was stalling. The port-o-johns on the east side of the street were calling my name, but I hesitated. I hadn’t heard even the rustling of a rat since entering Kansas City, and the quiet was downright terrifying in its own way. All of my PABs—that’s post apocalypse buddies to you surviving out there—would laugh their a**** off if they knew I was too uptight to cop a squat in the middle of the trashed urban avenue before me. But then, none of them were women with a fat ass and a few remaining synapses of decorum firing in their head.

Finally a sound! It looked like a half-installed sheet of roofing aluminum had finally discovered gravity about a block away. Crashing down onto who knows what, the sudden loudness of it made me lose a bit of bladder control. But only a bit. I’m a trooper.

Keeping still, I waited to see if the noise from the aluminum sheet would wake the bottom feeders. They rarely came out during the day, but it happened. S***. A rump roast as big as mine could be just the breakfast call one of them needed.

I quietly sidestepped to the right toward a couple of long-abandoned Honda bikes that surprisingly still rested on their kickstands. They looked as if their owners had just pulled over to use the port-o-johns ahead of me. All I’ll say is they’d better have put the seats down before they got 'et.

Nothing. All stayed quiet except for a whisk whisk coming from a candy wrapper being blown along the asphalt near my feet by a timid breeze made brave by the funneling action of the street. Still I couldn’t do it.

Aw, hell. I’ll just let it dribble down my leg. There’s bound to be a fresh set of pants somewhere in the debris on the outskirts of town. ‘Course I’ll have to take them off a corpse, but I figured that prospect held a little more decorum.

Now, you got to admit, that was a hoot (and easy to appreciate if you’re a woman). I can’t wait until the group tries another prompt. It's fun thinking outside the box but within the picture.

A Reading List For The Social Distancing Era, From Author Jade Chang