TASTE OF FIRE IS NUMBER ONE!

Here is the blurb for new mystery, TASTE OF FIRE about a female firefighter: 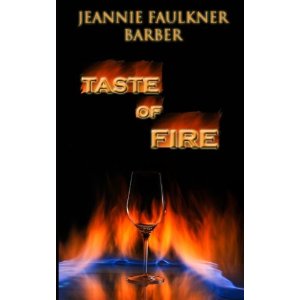 A fiery car crash leaves a disfigured arm on the young girl occupant. Supposedly abandoned by her mother, feisty Terri Neal is raised by her father, Fire Captain, Chuck Neal. Out of love and admiration for this man, she joins the ranks and becomes a top-notch firefighter.    Following his shadowy death in a mysterious building fire, Chuck’s image appears to his daughter and sets Terri on a quest to locate her biological parents. This mundane task propels her down a path of intrigue, romance, and peril. Light begins to flow into Terri’s life, but in the darkness lurks a death-like stalker.    Who will succumb to the insatiable Taste of Fire?
I'm so honored to say that Taste of Fire has been number ONE for 4 MONTHS on Goodreads.com in the Best Modern Mystery, Crime Fiction Books for 2012!
If anyone is interested in a copy, its availabe on Amazon, Barnes & Noble, Kindle, and Nook...OR on my website www.jeanniebarber.com  through PayPal.

Join me in praising God for allowing me to reach this goal in my writing career!

'Something To Talk About' Is A Slow-Burn Showstopper Romance