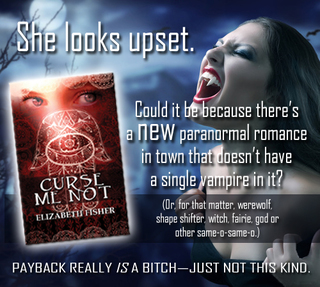 It’s only natural that my novel, Curse Me Not, should fall into the genre that I read the most and like the best—paranormal romance. What’s unnatural, however, is the novel doesn’t involve any of the usual suspects found in the genre. Not a one. In fact, to some paranormal romance lovers, I may have committed a sacrilege.

For instance, Curse Me Not manages just fine without:

Seriously, folks, I haven’t broken any law by bringing a new twist to paranormal romance. After all, the genre is a subset of “speculative fiction.” To quality as paranormal romance, Curse Me Not just has to boast an element—In addition to romance—that’s outside the “real world.”

Nonetheless, the paranormal element in my novel is not the existence of auras. I’m not ready to say auras aren’t real. Nor am I talking about curses on those auras. No way would I dismiss the efficacy of curses on some people out there.

No, the truest paranormal element found in Curse Me Not is my heroine herself, an unsophisticated woman who can see auras and clean away curses—a “bodywasher.” She doesn’t kick ass, she’s flawed and she’s way past her teens. Now that’s paranormal.

Elisa New Wants You to Think About, and Watch, 'Poetry In America'

In 'How Much Of These Hills Is Gold,' This Land Is Not Your Land

A Reading List For The Social Distancing Era, From Author Ben Philippe

New in Paperback: ‘American Carnage’ and ‘Mrs. Everything’

Looking at the History of Viruses and Public Opinion

Jen Gotch Is Not a Therapist, but She Knows How to Cope

The Nobel-Winning Economist Who Wants You to Read More Fiction

The Heroine of This Korean Best Seller Is Extremely Ordinary. That’s the Point.