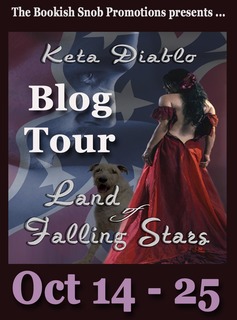 WANT A CHANCE TO WIN LOTS OF PRIZES, including an Amazon GC?

About Land of Falling Stars:

After her parents die in a fire, Sophia Whitfield struggles to save her beloved home, Arbor Rose. The Civil War has devastated the South, and another blue coat has come to steal her meager possessions. Before the hated enemy inflicts his destruction, she shoots him. And soon discovers the soldier is Gavin, the champion of her childhood.

Gavin's dark secret lurks in Sophia’s future. When she discovers the truth, she's torn between a burning hunger for the man she truly loves and loyalty to Jesse, their childhood friend. The despicable acts of war have changed everything Sophia and Gavin once cherished. Yet somewhere deep in their hearts, the mystical Land of Falling Stars still exists.

* An expanded version of the original best-selling Civil War novel

Brought to you by Books We Love Spice! Read “Why I Wrote Land of Falling Stars” http://bwlppspice.com

“LOFS Makes for one phenomenal read that will keep your heart pumping and the pages turning, not just from the delightfully sinful sex, oh no, the drama and suspense will carry you through till the end!” Book Junkie, 5 Stars

“Diablo pens a beautiful, haunting love story full of passion, deception, danger and the epic War between the states that will leave you breathless.” Night Owl Romance, 4.75 Stars

Thanks so much and have a wonderful week.

* * *
Excerpt set-up: Gavin is wounded from a knife fight with one of the villains. He finds Sophia hiding in a barn after the fight.

Sophia pressed her back against the rough-hewn planks of the stable wall and inched her way down to a bed of hay at her feet. With her heart thudding, she closed her eyes and willed the brutal images to leave her mind. Gavin could be dead, his blood seeping into the ground. The irony. Three years he'd been gone, fought in a hundred battles only to be killed after he'd come back . . . back to her. Oh, God, she couldn't think about it, couldn't stand to watch him die. She ran hard and fast the second Billy sliced through the soft, golden skin she longed to touch again. Sweet Mother of Jesus, what if he was dead and she’d never . . . .

She lifted her head and looked into Gavin's eyes. A horse neighed several stalls over and the moon spun out from a patch of clouds shrouding his lean body. His bare chest oozed blood and trickled into his waistband.

Relief flooded her and then panic. "You're bleeding again."

"Am I?" He glanced down at the wound and back to her face. "It looks worse than it is."

She hesitated when he held his hand out. She didn’t know what would happen when her skin come into contact with his. Beneath his bold perusal, she lifted her trembling hand.

"You're frightened," he said, his forehead creased. “Of me, Sophia?"

She shook her head and hoped he didn't see through her lie. After witnessing his rage moments ago, she didn't know what to expect from him.

"I would never," he said in a hoarse tone, "harm you." Moving in, he forced her back against the wooden planks. His warm breath fanned her cheeks. "I don't want you to fear me, ever." His chest rose and fell on torn breaths, and his mouth hovered over hers, mingling their breaths. "Kiss me, Sophia."

She looked into his eyes, transfixed by the depth of passion residing there. He placed his hands on the wall and bracketed her head. Their lips met. In the aftermath of the violence, she expected a harsh, demanding kiss, but it was anything but. Gentle and languorous, it shook her to the very core. His tongue caressed her lower lip seeking entry.

“Is that how it felt when Jesse kissed you?"

Trapped between the wall and his body, she looked away from those wicked eyes. Deliriously weak, shocking images of him crushing her beneath him stormed through her mind. Dear God, what's the matter with me? Promised to Jesse, bound to him heart and soul, I can’t allow myself to think about Gavin's powerful limbs tangled in my bed sheets, his head thrashing in delirium, or his hot, feverish eyes. Since Gavin had returned, her mind swam with carnal thoughts of the man.

A hand came down and lifted her chin, forcing her to look at him. "Hmm, Sophia, is it?"

"I'm so befuddled." Tears pooled in her eyes. "What about Jesse? I promised I'd wait no matter what happened, but . . . ." To speak her heart would be the epitome of betrayal to the person they’d both loved since the day they sailed the Rappahannock dressed as pirates.

He kissed her eyelids. "If he returned tomorrow, you'd fall into his arms; pretend you feel nothing for me, deny this passion between us?"

He tightened his grip on her chin, his tone harsh. "Would you, Sophia?"

"It would be that easy?"

"You need to leave Arbor Rose!" His raised voice startled her. "There's nothing left for you here! Your parents are dead and Jesse isn't . . . ."

Without conscious thought, she slapped him. "Don't say it! I can't leave Arbor Rose. Jesse will return and−”

"He's not coming back and you have to face it." He brought a hand to her cheek. "The entire country is about to explode, and if you had any god-given sense, you'd go to your mother's people in Illinois."

She narrowed her eyes, her tone icy. "Let me go. Jesse's coming back and when he does I'm going to keep my promise and marry him.” Her voice softened. "We must forget this, whatever it is."

"You want me, admit it," he said against her mouth.

He clutched a length of her skirt and shoved it over her hips, allowing his fingers to slide up the hot flesh of her thighs. A sound erupted from her throat again, no longer a moan of pleasure but a sob. He stopped on a heartbeat, stepped back and dropped his hands to his sides. Their eyes locked. His shone with lust and anger. She wanted to draw back, knew she should flee but something powerful held her immobilized. Warning bells rang in her head yet she longed to return to his kiss, feel his body against hers.