I will continue to criticize Arizona's new xenophobic immigration law. Immigration is a complex issue, but it's also a federal responsibility and when you start mentioning states rights it can bring up some rather ugly memories of Jim Crow laws. The borders do need to be secure, but at the same time immigration reform is needed.

Why don't they come legally? This is the question often asked in this state where the "they" are Mexican's and other South and Central American's crossing the border.

The simple answer to this question is they can't. Legal immigration quotas were set more than 20 years ago, and basically you can die waiting to get here legally. Companies in this country tactically endorse and invite up to a half million of these workers yet the current immigration system allows only 5,000 permanent visas yearly for that category.

Does that make coming here illegally right? No, but conditions in Mexico and other countries south of our border that are caused mostly by their governments and exacerbated by some U.S. policies make it something that is not likely to end. If it was my family starving and I had to wait ten years to legally cross the border to get them a better life then that's

what I would do rather than watch them die waiting.

If there was an easier way to receive worker visas and a pathway to citizenship do you think they would choose instead to cross some of the most dangerous desert in the world, face robbery, rape and death to come illegally?

The average wait to get through Ellis Island was 3-5 hours unless during a brief physical it was determined that the immigrant had an illness. If the mostly European immigrants that poured into this county from 1890 to 1924 had arrived in their ships and been told there was a 5-10 year wait to enter the country what do you think they would have done? Would some or maybe even millions have entered illegally?

"The death knell for Ellis Island, as a major entry point for new immigrants, began to toll in 1921. It reached a crescendo between 1921 with the passage of the Quota Laws and 1924 with the passage of the National Origins Act. These restrictions were based upon a percentage system according to the number of ethnic groups already living in the United States as per the 1890 and 1910 Census. It was an attempt to preserve the ethnic flavor of the "old immigrants", those earlier settlers primarily from Northern and Western Europe. The perception existed that the newly arriving immigrants mostly from southern and eastern Europe were somehow inferior to those who arrived earlier. "- The History of Ellis Island.

Does that sound familiar?

It's like the wonderful wishful reminiscence for the 1950's that white people seem to have. The selective memory of a small town America where the wars and depression were a fading memory and people were feeling good about themselves. That was for the white Americans who made up 90 percent of the countries population at that time, and the majority of whom considered themselves Christians.

For other Americans the 1950's were not so idyllic.

Discrimination against the Chinese and other Asians.

Women who were still in many ways treated as second class citizens.

Is this the American culture that is endangered and threatened? I would like to believe the culture of this country is not so easily defined and much more diverse. I would also like to believe that offering a pathway to citizenship to illegal immigrants who have been working in this country for years would not be construed as a threat to the white power structure.

In New York City in the 1900's many neighborhoods continued to celebrate their heritage and speak their own language. You could hear Italian, Polish, and other languages throughout the city. Even then it was perceived as threatening to "older immigrants" but as these folks had children and their children had children English was learned. Some continued to speak their original language and practice their customs as well.

The same is true for Latino's in this country today. Some of the older immigrants still speak little English, but their children and grandchildren do, and in this modern world it's advantageous not only to the individual but also to this country if you are bilingual.

These drug runners are heavily armed and are a threat to law enforcement officers. This is why the focus needs to be on stopping the drug smuggling and reforming the immigration laws to allow the good people in search of a better life a pathway to come legally.

Border patrol officers have lost their lives in the line of duty to stop the drug smuggling. The drug smugglers are well armed and guess where the get at least 30% of their weapons from. The good old gun loving USA. It's quite possible that a gun sold right here in Arizona could end up being responsible for an officers death.

Stopping the drugs will be very difficult because of this countries great demand for the product. The largest percentage of any drug smuggled across the border is marijuana. A lot of the violence along the border could be eliminated by legalizing and regulating this drug.

The drug cartels and gangs are the ones getting rich off this drug much like the mob and other gangsters got rich smuggling alcohol during prohibition. During prohibition violence was rampant along the length of the Canadian border until alcohol was legalized and regulated.

Back to immigration. Meanwhile back at the ranch in Phoenix, Sheriff Joe Arpaio and his Maricopa County squads round up brown people in sweeps to catch people here illegally. Last week they raided four McDonalds and arrested 21 people who looked Latino. The only problem besides the fact that racial profiling was used was that one of the people arrested was a U.S. citizen. After being cuffed and held for four hours she was released.

Sherriff Joe has been doing this for years, and the new immigration law only frees him to violate more citizens rights. If one citizens rights are violated then all of ours can be. Can you imagine the outcry if he had raided a Starbucks and rounded up all the workers of Caucasian appearance after a tip that there were undocumented French baristas employed there?

My problem with SB1070 is it will no doubt violate the civil rights of some Americans. Sheriff Joe's reign of terror has been legalized by this bill. Arpaio who calls himself "America's toughest sheriff," hasn't backed down, despite a federal investigation. For more than a year, the U.S. Justice Department has been investigating Arpaio's office for alleged discrimination and for unconstitutional searches and seizures.

July 4th is Independence Day and is widely celebrated as it should be by all Americans even though on that day in 1776 all people in this country were not free, and some were not considered human beings. This country has come a long way, but still has a long way to go and there can be a fine line between patriotism and arrogance.

Am I proud to be an American? Yes, but it's not a blind pride. This country has made great leaps in liberty for it's citizens, and at times for other countries abroad, but we can do better. There is the blood of patriots on our flag but there's also a good share of blood from people this country has unjustly annihilated, and from countries we have oppressed.

We can do better.

Then again, what the hell do I know, I'm just a guy sitting on his sofa here in Tucson. 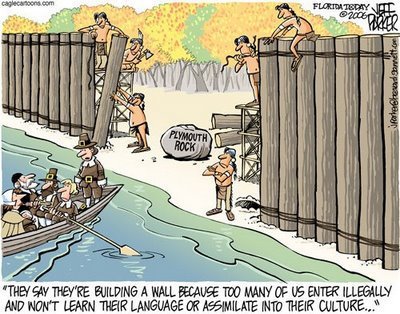