Around the Globe with LARRY WINEBRENNER 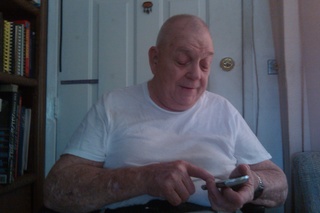 It's October and I'm holding on to as many warm days as possible. A little rain yesterday and hot temps expected today. However, that's all back in Iowa. Where am I today? A fine eatery in an ancient city on the Sea of Galilee. The water is beautiful with fishing boats bobbing and though modernity has changed things throughout the centuries, you still get a sense, just something in the atmosphere, from when a man called Jesus once walked the streets. Narrow alleys next to grand hotels, maybe a ruin or two amidst the bustle of cars and people.

I'm with this week's featured author, Larry Winebrenner. So as we eat and drink the local fare and enjoy the local sites, let's learn more.

My name is Larry Winebrenner. I know you introduced me, but I state my name again so folks will catch the uniqueness of the name. Not like any other name in Miami---no other name like it in South Florida. Yet, long before I came to Miami, the woman I was one day to marry graduated from high school in a class where another student---whose father was Larry Winebrenner---graduated, and my wife-to-be didn’t even know she---nor I---existed. The other Winebrenner is not related to me.

That little parable is my way of saying what may make a person fascinating may simply be the person’s existence. I could point out that

But I bet there are thousands in the city of Miami alone who could tell the same or similar stories. So what makes that fascinating?

Some people are fascinated that handicapping conditions have never  stopped me from performing activities enjoyed prior to the handicap, e.g. I won a typing contest ---while in the navy---by typing 121 wpm w/o mistakes. This was done on an old Royal.

Considering the fact that I taught probably more than 35,000 students at Miami Dade College, and tried to instill in them an acceptance of others regardless of background, age, gender, or other differences, one time I quit a job because I was told my supervisor would be an Afro-American.

I was 12 years old and had much to learn. That would not threaten me today. Nor having a supervisor who was a woman, or younger, or from another country, or any of the dividing elements that threatens our stability in society today.

3. What interested you to become a writer rather than something else such as an astronaut?

Actually, I wanted to become a movie star and never thought of writing as an occupation. I knew I could tell stories and could write almost as long as I can remember. I just couldn’t understand why Magazines weren’t interested in buying my stuff. When I grew older, I thought I would like to be a research librarian. My dream was that a millionaire with a large library would hire me as a live-in librarian for care of his library. Until I learned such positions didn’t exist.

Still, I had no desire to become a writer as my occupation---simply to have enough time to write. Even in high school I told the librarian I planned to write books when I graduated---not write books for a living, just to write books---and she didn’t question me. She just told me she knew I could do it and simply asked me to dedicate my first book to her. I told her my first book would be dedicated to my mother, but I’d dedicate my second one to her.

My first book was a textbook on poverty, and was dedicated to my mother. I wrote several books after that, but mostly for the pleasure of writing. Then one of my manuscripts fell into the hands of a retirement home resident. It started making the rounds and before long there were several requests for copies of my manuscript. It seemed prudent to publish a few copies of that book. That’s how I got started as a published author.

Luke, author of Luke and Acts---I would like to hear more that he did not tell about himself in his books and more about his assessment of Paul.

Hugh Lofting---It would be a pleasure finding out how and why he created the talking animal Doctor Dolittle series.

Rex Stout---I would like to discuss Nero Wolfe with him.

James Lee Burke---I’d like to ask him how success felt. Maybe discuss our times together when we were colleagues at Miami Dade College, out times crabbing and crab dinners together, ask him if he remembered stepping with his bare foot on the snake driven into his hallway by flood waters, etc.

The books I have written tend to hold readers entranced, unaware of the passage of time. One young couple wrote that they had taken turns reading one of my books to each other so they could see how it ended.

My process likely does not lend itself to replication by others, but here it is. I will have a notion of the complete book without thinking through the several elements of plot, characterization, structure, nor any actual writing process. T hen I will begin writing, no outline, no plot, not even any characters.

I begin by introducing a character, generally facing a problem or in trouble. I flesh out the character and enhance the problem. As I write, trying to free the character from her/his dilemma, other characters emerge, sometimes important, sometimes just passing through, but significant characters do emerge. The problem could be resolved as I write, or could hover to the end, affecting the story to the end.

Regardless how the initial problem evolves, the character always faces another element of that problem, or a new crisis at the end of each chapter.

As I’m writing, I’m remaining aware of sights, smells, scents, tastes, physical contacts, all affectations of the senses, either by the group, or by a character.

I also am aware of readability.

By readability, I mean physical structure. I don’t care how enthralling a scene, or description, the eyes get tired of sorting phrases and sentences from long sections of print. If the section is 30 lines long, the eye tends to note a struggle ahead and by line 20 is rebelling. This is not a conscious action nor an intellectual practice. It just happens. Sometimes the reader wonders why that book, as scintillating as it was, was not really totally satisfying.

This is particularly true when the passage is not scintillating. The passage may be describing or discussing the author’s favorite subject. Perhaps it even fits in the book. But to the reader it goes on and on and on.

None of this is planned, understand. It just enters the process.

Outline the story. Collect information you may need, e.g. about the character’s occupation. Fully describe your character whether you use all of it in your writing. Write your story from beginning to end. Don’t worry about misspelled words, typos, or answers to minor questions. Write out the whole thing. Place your manuscript on the back burner. Begin a new story. After a few days begin editing your first story.

No one can substitute one’s own conscience for another.

I’m writing the third book in the Henri Derringer series---The Case of the Closed Nursery Rhyme.

I’m writing a biography of a rising star.

I see Timaeus the Tracker and Bron, Trek Master each as first in a series but only have a notion about Bron.

10. Where can someone find more information about you and your books?