Around the Globe with Carolyn Niethammer 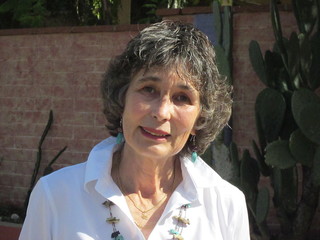 It's a warm and humid Friday morning and I'm all ready to post part three of the recently popular series of blogs regarding fitness and writing. As mentioned last week, I suspected that an author might intrude upon this series and I was proven correct when the door burst open, the cat raced under the bed and this woman stood in the doorway. "Come with me," she commanded. "Yes, ma'am," I replied. (Well what else was I supposed to do? Call the cops? I only do that when the upstairs neighbor's dog starts barking.)

I thought we'd hit an air-conditioned restaurant on the coast of England or Australia...you know someplace cool with iced drinks. Any place to get me away from this August heat. She sets controls of the transporter and I'm anticipating cool temps...only to find myself lounging moments later on the back part of her house...in Tuscon. Yes, that Tuscon.

"It's November," she said. I look at her and say, "You get yourself a new calendar." "Okay," she says, "Pretend it's November. Look at the snapdragons and petunias in full bloom and the garden is ready for harvesting."

(Okay, maybe I'm wrong and it IS November. Anyway, she hands me a glass of iced tea and we begin the interview.)

My name is Carolyn Niethammer and on a Sunday afternoon in mid-September I’ll be fascinating because I will have brought together Tucson’s most fascinating people, my friends, as I celebrate the rollout of The Piano Player in a real tavern, no less. Among them will be a couple of novelists, a medieval historian, a glass blower, a dealer in vintage clothing, a teacher of Japanese flower arranging, several artists, a film maker, a photonics reporter, a labor and delivery nurse, a beekeeper, a dealer in Native American foods and Tarahumara crafts, an immigration lawyer, and an antique shop owner. Each one of these friends opens an eye onto another part of life for me.

I was what some people might call a hippie in the late 1960s and early ‘70s. The long hair, the beads, the drugs. My mother was certainly scandalized. I lived on an old apple farm in Northern California and learned about edible wild plants from an Indian man down the road. That led to my first book American Indian Food and Lore, about Native American uses of edible plants on the desert..

3. What interested you to become a writer rather than something else such as rocket scientist?

I started out as a journalism student and went to work for newspapers after graduation. Being a reporter gave me a license to be nosy or you could call it “research.” I was a little shy approaching people, but having my reporter’s hat on gave me cover. That continued when I graduated to writing books.

I’d love to sit down with any of the great food memorists: Julia Child, M.F.K. Fisher, or Ruth Reichl.

Books can take you away to another place, or another era even centuries away. You can meet people you would never encounter in real life. I actually missed a plane once when I was sitting at the departure gate because I was deep into a book. In my defense, I don’t think they announced it all that well, but there I sat while they closed the doors.

I’ve been writing books for 40 years, so the process has changed over the years. I love historical research. Originally everything thing went on 3x5 cards and photocopies that were referenced on cards. Now I tend to enter more on the computer so it is easily searchable. The Piano Player is my tenth book but first novel. I began the research hoping to do a biography of Nellie Cashman, who was well known as a miner and boarding house owner around the turn of the last century. When that didn’t quite pan out, I realized that the movement of people from boomtown to boomtown in the late 19th century always hoping to strike it rich, was full of drama. There was opportunity to tell a women’s story. So now Nellie Cashman has become a character in The Piano Player. The piano player herself is a young woman who works at the famed Bird Cage Theater and I made her up to enliven the story. The novel is heavily laced with historical events and people so I relied on those old cards. The story begins in Tombstone and I have been there many times. I even took a trip to Skagway and Dawson City in Alaska to research the second half of the book.

The computer has made the writing/rewriting process much smoother. If I come to a point in a plot where it is clear something had to have happened earlier to make this reasonable, I can just go back and add it rather than having to type a paragraph, get scissors and tape and insert it.

Take a class at a community college. Get a copy of Structuring Your Novel by Meredith and Fitzgerald or any number of other good guides. Keep trying different approaches until you find one that fits for you. And you have to actually write. Butt on chair, hands on keyboard.

Earlier in my life when something seemed difficult, I’d tell myself, “Plenty of people a lot dumber than you can do this well,” and I’d get the courage to plunge ahead. Now, having just passed my 70th birthday, I know there is not unlimited time stretching ahead so Carpe Diem (Seize the Day) has become my mantra. It is time to drop the peripherals and concentrate on the essentials.

I am at work on a novel set on a hippie commune in 1969. Sex, drugs and rock ‘n roll. Lots of fun. It’s based on my own background and a number of memoirs I have read by other people who have written about their colorful experiences in the ‘60s and early ‘70s. I have lived with these characters in my head for years; I think about them every night as I fall asleep, and now it is time to get them down on paper. Sometimes they surprise me. I’m about a third of the way through the book, but I know much of it will have to be changed. Some of these wonderful characters might have to disappear if they can’t hold their place in the plot.

All my books are listed on my website: www.cniethammer.com. The Piano Player is available from Oak Tree Press, the publisher, or on Amazon at https://tinyurl.com/madl42a

3 Picture Books: How to Hike, Camp, Relax in the Great Outdoors