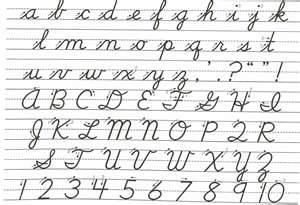 Harken back to those early years of learning cursive. Why did we learn it? Why was it invented in the first place? You have basic block letters and printing is just as good and even better in some cases for legibility.

Cursive was invented, in part, to save pens. See way back when humans used quill pens, they found the tips breaking and the ink spattering when the writer lifted the pen from the parchment and placed it back down to write the next letter. What a hassle. It's not like Shakespeare could bustle on down to the local Walmart for a new set of quills. So someone developed a writing style where the letters in a word were joined, thereby reducing the number of times the tip is removed from the paper.

However, now that we have ink pens I wonder if cursive is really necessary anymore. Sure, it speeds up writing, but would schools be better teaching legibility? Everybody develops an individual cursive style, sometimes so outrageously wild it's hardly legible. I am no exception. I am one of those individuals who has trouble reading his own handwriting. Only a few of my high school teachers could read my papers. Even when I sign my name slowly and neatly it is still a mess. Printing is so much better for note taking.

So the question now is: why do I write most of my stories longhand and in cursive? Computers and typewriters are readily available, plus, the former has spell-check (Which, by the way I must caution to, as Ronald Reagan once said, “Trust, but verify.” Until I updated the computer's dictionary, my computer kept making me part of the American Teak wood Association rather than Taekwondo.)

The simple answer is: my brain thinks faster than I can write, but not as fast as I can type. When I'm writing a story, my brain is thinking ahead to the next few sentences and the hand just follows along behind. I have more content within a scene or a chapter. I can expand better on my character's thoughts. I can jot side notes of what to include later because my brain has thought of a cool line or scene.

When I type, my fingers move faster than my brain can think. So I'm constantly pausing between sentences while my brain tries to catch up. Also, I haven't learned to pace my typing so my fingers move too fast at times and I end up making a lot of corrections, which interrupts my train of thought.

This longhand method works for me. I can write the first draft in longhand and do a first edit when typing the words into a document. Sometimes I get on a roll and the writing isn't quite how I envisioned it so typing allows me to correct my vision. And yes, sometimes I have to study my hieroglyphic scratching to decipher some of the words.

I've tried various sized notebooks but since most of the world is right handed, the spiral is on the wrong side for my southpaw. For awhile I wrote backwards through a notebook to avoid the wire. I have found legal pads to be the best so far. I do need to remember to bring along a folder to keep them in so the pages don't get dog-eared or ripped.

I will type blogs because they're shorter and not as critical for a future publisher or critique group. I may later discover errors, but I do read through them before posting to correct rough spots, but longhand then typing just isn't as important with blogs.

Novels and short stories: yes. Curse that cursive, but I use it.

Dealing with The Demon

Polo For All: PW Talks with Kareem Rosser

In 'Ghostways,' A Trip To Two Well-Traveled Places Reminds Of Things That Are Lost

Chef David Chang On Depression, Being A Dad And The Burden Of 'Authenticity'

From Syria To America: A Teen Seeks A 'Safe Place' In The Universe

In “This Is Your Time,” Ruby Bridges Urges a New Generation to Keep Fighting

7 New Books to Watch For in December

‘The Last American Aristocrat: The Brilliant Life and Improbable Education of Henry Adams,’ by David S. Brown: An Excerpt

Three New Books That Stare Up at the Stars

The Brilliant, Bitter, Unlikable Scion of an American Political Dynasty