A short excerpt from the soon to be released, "Passion in Paris: Directions of the Heart" 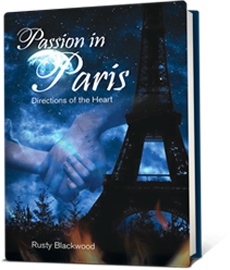 The dreaded words that I had feared for so long had finally been spoken. They echoed in my head -- hurting me -- tearing at my heart, ripping it apart, causing me pain like I had never known. The words were killing me just as sure as blood was draining from my body, but I knew if these words were really true my heart would stop and I would die long before my blood was gone, long before the fire's dreaded gases or flames reached me. I had understood Dean's words as well as their meaning but I would not accept them -- would not even listen to them -- as something inside my head snapped and the unmoving, stubborn determination that had long since run out came rushing back with a vengeance as my lungs summoned every bit of strength that still remained.

I was being lifted from the bed when I heard Philip's voice passionately scream, "Stops! Puts her down! You are to hurts her! Just looks at how much you haves upsets her! She has becomes completely distraught. I will never be able to calms her now! You have ruined everything here! Just listens to how she screams! She is so in amour with Monsieur Malones. How cans you be without compassions at this times? To cause her such anguish with lé terrible thruth that even I haves managed to withholds from her delicate ears. You are all deplorable and without heart!"

Dean's voice haughtily answered, "You've said quite enough! She is my wife and I will say what happens with her! Now you get goin'!" Another explosion was heard somewhere beneath us; as the sound died away, Dean frantically hollered, " Fran, come on we've gotta go now! Look! The smoke's gotten worse and it's -- aacck! -- gettin', aa-aa-ch! Gettin' stronger! F***, this smoke's choking me ... Come on, you two have to help Joy. I can't take my eyes off this sorry bastard for one second! Aa-aa-ch-ch!  I'd love to leave 'em here for the fire to have but he's goin' to the law!"

The two women continued their task of lifting my squirming body while I kicked as hard as I could against it.

"Nooo! Don't touch me! Leave me! Leave me here with him! Don't! Please don't do this to us. He's not dead! He's just under the influence of the pills! Oh my god please listen ta me!"

My pleas were falling on deaf ears. Even in my frantic state I realized their terror. The fire was coming fast, lives were on the line and death was imminent if we did not leave, yet how could I make them understand what I knew in my heart was true? Cullen was not gone; he couldn't be. I'd feel it if he were; somehow I just knew I would. But they didn't believe me and if I was unable to convince them of what I knew deep within my soul to be true, then death really would take him, for they would leave him behind and even if it meant my own life I would not let this happen. Come what may I would not allow it.

Holding fast to Cullen's outstretched hand I would not release my grip, as I desperately fought to save his life while they kept struggling to pull me away.

Dean's abrasive voice screamed at me, "Joy, for christ sakes let go of his hand! Now! It is useless to do this ... There's no more time! My god the flames are at the far end of the f*****' hall! I'm sorry he's gone, but we can't waste anymore time or we're all gonna die! We've got to go now!"

As Cullen's limp hand left mine, I frantically screamed, "I won't go! I will not leave him to die this way! Alone! You can leave ... leave me ... Leave me, Dean ... Goooo! While you can! It's all right it's my choice, my life! It's already gone if you won't take him too ... Pleeeease help him!"

Realizing I would fast lose this battle to either Dean or the oncoming fire, I had to succeed or lose Cullen forever. I had to get him to listen, to somehow touch the compassion I knew he held deep within his heart, even if it was to help the man who'd taken his wife and I continued to plead with every ounce of strength that still remained in my body.

No one would listen and my strength was almost gone. I sobbed as I was being carried around the bed. My eyes remained fixed on Cullen who lay waiting for whatever would greet him on the other side. As they carried me away vomit spilled from my mouth. My body shook and I could no longer breathe. I knew the end of my life had finally come and I didn't even care, for it had ended when Dean spoke those dreaded words. Now he might as well bury what's left. He refused to take my Cully out of this horrid nightmare, but he would not let me remain in it and at that moment, I truly hated him.

'JRR Token' is a punny name for a cryptocurrency, but Tolkien's estate is not humored

The memoir 'Lucky' was about a real rape. The accused is now exonerated

Not Your Traditional Hanukkah/Christmas Picture Book