A Flash in the Pan 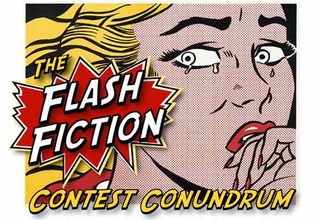 “Flash Fiction” is a short—sometimes really short—form of storytelling. The number of words required in flash fiction differs from writer to writer, editor to editor, contest to contest, but some purists insist that it’s a story told in less than 75 words. For less-rigid flashers, anything under 500 words is flash-worthy. Either way, and despite the limited length, flash fiction can be a b**** to write.

For instance, the paragraph above is 68 words. Could you tell a complete story in a paragraph just a little longer than that? Yeah, writing flash fiction ain’t as easy as it might seem.

At a recent meeting of my writing group (a subgroup of the Knoxville Writers Guild), we decided to try our hand at writing a specific piece of flash fiction that we would enter into a contest in October sponsored by Brilliant Flash Fiction. This online “zine” showcases writers from all over the world, and the contest required 500 words or less using the writing prompt: It Came in the Mail.

Now would you believe I won Third Place! I admit to being totally jazzed about it because there were a lot of good entries. Anyway, here's what I submitted:

The Secret of the Snoring Time

“What you got there, Millie?”

I shrugged as I pulled a greeting card out of a red envelope. “It came in the mail addressed to me, but there’s no return address. It’s a Valentine card, of all things.”

“Well, you already got your card from me this morning with the chocolates,” Franklin said in a rush as though he’d be in trouble for sending me a second card. “Who’s it from?”

“That’s what I mean. No return address on the envelope and on the inside just a silly printed poem about true love and such. It’s signed ‘always.’ Like that’s supposed to tell me something.”

I watched my husband dismiss the mystery with a shrug of his own before continuing through the rest of the mail. When I saw his attention catch on a car parts catalog, I sat down at the kitchen table to examine the small Valentine further.

I flipped it over. The printed price confirmed it was a cheap, discount card, although, flipping it back, I thought the swan design on the front was rather nice. Yet, the swan, the poem, was all so sticky with romantic sentiment that the card couldn’t have come from one of the kids. Nor would it have come from a friend. Sally would have punked me with a music card blaring “Cat Scratch Fever” or the like—she was into cats big time—and Nora didn’t believe in Valentine’s Day. She said its only purpose was to reduce the world’s population by inducing people without a Valentine to commit suicide.

I admit I felt flattered by the card even though deep down I suspected someone had simply made a mistake. An “old” married woman like me didn’t get Valentines from unknown admirers. What’s next? A dozen roses left abandoned on the front stoop?

With a smirk and a humph, I decided to let the mystery be. I could always make a guessing game of it later that night when Franklin started his usual bout of snoring about three in the morning. His rhythmic foghorn would wake me, but instead of me lying in bed planning the meals for tomorrow or starting a grocery list in my head, I’d go through the faces of each man I’d run into lately to see if a Valentine suspect came to mind. Oh, not that one of them would have actually sent me the card, mind you. I would just fantasize about which one I would have wanted to send it.

“What’s for supper?” Franklin asked, tossing his catalog back in the pile of opened mail.

I tore my eyes off the Valentine long enough to frown up at him. “Aren’t you taking me out for Valentine’s Day?” I asked. After close to thirty years of watching the wheels turn in my husband’s head, I knew he’d come up with the appropriate answer if I gave him long enough.

Franklin didn’t have much of an imagination, you see.

'Just Mercy' Attorney Asks U.S. To Reckon With Its Racist Past And Present