Mark Carver is the author of The Age of Apollyon. Following the summary of his book, I hit him with seven questions to give you some insight into his work and life. 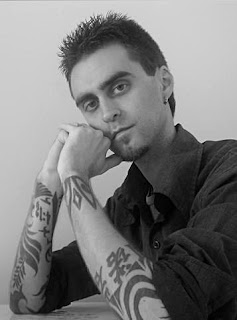 Summary: Notre-Dame Cathedral lies in ruins. The mangled corpses of the possessed are scattered in the shadows beneath the pulverized Gothic towers. This is the aftermath of the Manifestation....Satan has revealed himself to the world, which falls trembling at his feet. Religious genocide sweeps Europe and Asia, and the world's greatest fortresses of faith are smashed to the ground. The New World and Australia become safe havens for refugees fleeing Lucifer's wrath. Heaven remains silent. The followers of Christ cry out: Where is God? Patric Bourdon believes in himself. He claims to be a member of the Church of Satan, but in reality, it is his own hedonism that drives him. His zealous and pregnant fiancée waits patiently for him to "man up" and take responsibility for his impending family, but the lure of drugs and debauchery proves too strong....Until Patric receives a command that he cannot refuse. Tourec, his self-righteous half-brother, has begun a campaign of terrorism against the forces of darkness. The Church of Satan is paralyzed with fear as Tourec and his band of rogue assassins seek vengeance for the evils that Lucifer has wrought upon the earth, and Patric is commanded to seek out and neutralize his brother by any means necessary....Or his fiancée and unborn child shall perish.
A thrilling blend of action, horror, and tense family drama soaked in ultra-bleak Gothic atmosphere and saturated with somber religious iconography, THE AGE OF APOLLYON seeks not only to entertain, but also to illuminate the burning question of our time: why does God allow evil (and evil men) to rule the world? THE AGE OF APOLLYON blasts through the sanctuaries of the world's greatest cathedrals, from the majesty of the Vatican where the Voice of Satan sits upon the papal throne to the ruins of Paris where the darkest nightmares of blasphemous perversion are summoned. It is a sweeping story of vengeance, redemption, sacrifice, and sorrow that will plunge to the depths of mankind's depravity, but also offers hope for heaven's mercy. THE AGE OF APOLLYON will shock and thrill those who enter its world...and this is just the beginning.... 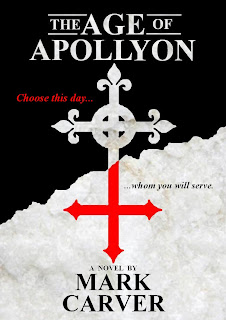 And now for the interview:
Give us a brief introduction about yourself. I'm an American currently living in China with my wife and son. I teach English classes at a Chinese university. My interests include art, tattoos, heavy metal, cathedrals, a cold beer, and of course, reading and writing.
Tell us about your writing. What genre(s) do you specialize in? I've been writing stories of all kinds since I was a little kid, but I've always been drawn to sci-fi, action/adventure, and horror. I like to infuse all the elements that I enjoy reading into my own writing. I'm a sucker for intense dramatic atmosphere and melodrama, and I try to make my writing moody and engrossing. I also enjoying writing about characters that are unlikable and even repulsive. I see it as a challenge: to make readers loathe a character but still feel compelled to read about them.
Who are your favorite authors? I pretty much only read classics. I rarely pick up a book that is less than one hundred years old, though I do enjoy some modern authors. Anything from the Gothic, American Romantic, and Victorian eras suit me just fine, but I also enjoy intense psychological stories, regardless of genre or era. Lord of the Flies by William Golding is my favorite book.
What inspires you to write? I like writing what I would want to read. I get most of my inspiration from music and movies. I am a very visual writer and I try to replicate what I see in my mind through words. I listen to a lot of bombastic music like death and doom metal, and this helps put me in the mood to write. I love action movies that are explosive and over-the-top, so I seek to combine rip-roaring action with atmospheric creepiness. This is the direction that my writing is going now, but I'm sure my inspiration will change when I branch out into other genres.
Describe your writing process. The time of day doesn't matter, but I have to be alone, either at home or in my office. I usually listen to heavy metal music, and I like to drink beer or green tea. I find my best bursts of creativity happen after I've watched a TV program or movie.
Any upcoming projects?  The Age of Apollyon just came out this month, but I'm already 2/3rds finished with the sequel, called Black Sun. There will be a total of three books, and I expect to finish Black Sun early next year. I have a few ideas in my head that are just waiting to pop out, and I'm pretty good about keeping a steady writing rhythm, so I hope to crank out at least one book a year. You'll just have to wait and see.
Where can we find you and your books?

'Perestroika In Paris' Is A Cozy, Fairy-Tale Trot Through The City Of Lights