Q1: Thanks for participating in our Authors.com Spotlight Interview series David! Please introduce yourself and your book to help our readers get to know you.

A: I’m David Berger, originally from Long Island, but now a high school English teacher in Land O’ Lakes, FL, and author of the Greek myth/fantasy novel, Task Force: Gaea—Finding Balance which is a compelling chronicle of how the folly of the gods reshapes history, and only mortals—thousands of years later—can hope to fix that which an angry goddess destroyed. It’s currently available at Amazon, Barnes & Noble, and Smashwords. 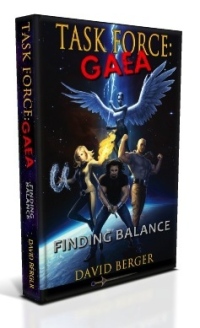 Q2: Please explain how you came to be a writer, what inspired you to write your book(s) and how long it took.
A: I was one of those geeks in high school who couldn’t get enough of English, and my teachers were outstanding; one of whom, Mr. McGrath, provided me with my initial spark: “On a blue Aegean night, when all the gods and nymphs have said adieu, your muse will find new life.” I wanted to tell stories, even though my skill wasn’t as developed, but the desire was got me started. In 1985, I wrote my original story that sparked my novel, and even though it took as long as it did to publish, it was worth the wait.

Teaching is my passion, but writing is one of my loves. Around ten, I fell in love with comic books, back when I rode my bike to the stationery store and bought off the spinning racks. At the same time, I was inhaling Greek mythology. School started me on this addiction, but then I was enrapt. The most amazing thing happened: I found Wonder Woman. It was synchronicity—comic books, mythology, and Saturday morning cartoons like the Superfriends. Wonder Woman was a superhero born of the gods, and I then knew I wanted to write fantasy stories about heroes like her, or Hercules, Perseus, Theseus, etc. In high school English, we had to write short stories, and I penned “The Olympus Corps.,” the predecessor to Task Force: Gaea by almost 27 years.

Q3: What did you enjoy most about creating this book?
A. Working with, and reinventing, mythology made me giddy. Something about creating a world familiar yet not intrigued me and challenged me. I find that I am at my best when I feel pressured, whether it be time or content. One of the gods I’ve grown to love, Apollo, has become a part of me in a way. His development over the years has made me feel like a father rearing his child, an unruly child at times, too. Sometimes my ideas of where I thought he should go didn’t mesh with where the story ended up, so I had to abandon early ideas only to replace them with better ones. That’s my enjoyment, too—playing with words.

Q4: What facets of your life, both personal and professional, are woven into your book, if any?
A. Aside from one character being a teacher, nothing else really comes from my life. I didn’t want to make the characters versions of me, although I think at some level they are. I didn’t make a conscious effort to stray from personal or professional connections, either; I think that just happened. My life, such as it is, wasn’t something I found as meaningful as inspiration as other sources, like mythology, science fiction, and fantasy.

Q5. How did you get published?

A. I deliberated on this for a while, but after speaking with a friend of mine who had self-published through an on-demand publisher, I chose that route as well. CreateSpace was easy to work with, gave me incredible control over my output, and didn’t expect me to pay for anything. I chose to purchase a universal ISBN and extended distribution options, but that didn’t cost that much. For as much as I would love to be published by a publishing house, I didn’t think I had the patience to wait for that to happen.

Q6: Did you have any surprises or hiccups along the way during the book writing and/or publishing process?
A. Not really. Although, it did take me about 25 years to get from idea to published work, so you could call that a hiccup. But, the writing did what it’s supposed to do: evolve over time, allowing me to discover my voice. If there were any surprises, they were more related to how much I enjoyed writing more and more. I had always found pleasure in creating people and worlds, but the writing of this novel showed me what perseverance and zeal can do. Publishing was quite easy, no surprises or hiccups there.

Q7: What one thing did you wish you'd known before you started this project?

A. I wish I’d known how long it would take to create the finished product. I never started out writing a novel, so that made the project that much more arduous. It grew into something very different from the original piece, too, and I hadn’t anticipated how much it would.

Q8: You're a fly on the wall when readers are discussing your book.   What would you hope to hear them say about it?
A. I would to hear how much they enjoyed the different take on the Greek mythology, how much they liked the modern take on the myths with the major heroes, Aegis, Aether, Aetos, and Zodiak. I know that most stories contain many similar ideas, but I would like to think I’d hear about how original certain aspects of the novel are compared to others.

Q9: Tell us one thing about you that most people don't know or would surprise them.
A. I mentioned earlier that I am a Wonder Woman fan, but I have two glass cases in my house that house most of an ongoing collection of Wonder Woman paraphernalia and figures. A few posters adorn the walls as well. I’ve been collecting since I was young, almost 35 years now. Most of my friends on Facebook know of my interest, but I don’t know how many have seen the “Shrine” as I call it. Her character has been a tremendous muse to me over the years, especially because of her affiliation with Greek myths.

Q10: What single piece of advice would you give new authors?
A. Never let anyone discourage you from pursuing your dream to write. If it’s your dream or love, then just do it, no matter what. Form, style, technique come in time, but your ideas should be expressed so that you can mold them into something you’ll be proud of.

Q11: Share a short summary of a typical day in your life with us please.
A. Since I teach ten months of the year, my typical day includes getting up at 5:30 a.m. (or whenever my cat decides she needs to be fed), at work by 6:30. I finalize what I need for the day until my students arrive at 7:30. Basically, until 2:00 p.m., I’m teaching, but after that, I have some coffee with colleagues, talk about the day, vent a little, and then work until 5:00 or so before I head home. I have dinner with my partner and then into one of my many writing projects (blogs, sequel, short fiction). I spend a little time on Facebook and Twitter before I head to bed around 11:30 p.m. The next day? Lather, rinse, repeat.

Q12:  Describe where you do most of your writing. What would I see if I was sitting beside you?
A. In my home office, my desk juts out from a bookshelf into the middle of the room. With a window behind me, I sit facing a framed poster of my novel’s cover on the wall. To my left is a massive Ikea shelf with hundreds of books, and to my right and behind is the Wonder Woman Shrine. Usually when I write, I’m burning a candle, partly for scent, partly for that mythical lamp of knowledge idea. Corny, but helpful. Oh, and if I’m lucky, there will be a cat in my lap.

Q13: What's your motto or favorite quote you like to live by?

A. Mediocrity is for the timid; excellence, for those who dare.

Q14: Is there anything else you'd like to share with us in closing such as your website, an imminent book launch or what you're working on presently?

A. Well, I have a blog where I post content related to writing in general, ideas that pop into my head, and novel related posts: http://www.taskforce-gaea.com. On Facebook, I have a page for similar content:http://www.facebook.com/taskforcegaea. I’m working on the sequel to Task Force: Gaea—Finding Balance right now: Task Force: Gaea—Memory’s Curse with an anticipated finish date of December 2012.

Also, I am working on a compilation of LGBT short fiction with a few other writers, release date should be late fall. From October 6 – 8, I will be a guest at Books in the Basin Book Festival in Odessa, TX; October 19 – 21, I will be at Necronomicon in St. Pete, FL with an author’s table; November 30 – December 2, I will be at Bent-Con, an LGBT comic convention in California.

Thanks for your time David! Please share this Authors.com Spotlight Interview with friends and fans by linking to it, Tweeting it, Digging it, sharing it on Facebook and generally shouting about it anywhere you can. We'd ask fellow members to support you by doing the same.

Members, want to be interviewed too? It's free! Instructions are here: http://www.authors.com/forum/topics/be-interviewed-for-the-new

David, don't forget you can add your Basin Book Festival event to our Events Calendar if you haven't already. I enjoyed your interview! :)

“The Baby-Changing Station” by Rhett Miller and Dan Santat