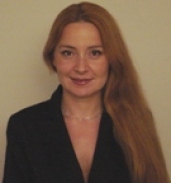 Alexandra Ares has not received any gifts yet

My Brief Bio from Readers Favorite

Alexandra Ares was born in Bucharest, Romania and reborn in New York, NY in 1998 where she still lives as a single woman. She is the award-winning author of the novels “My Life on Craigslist”, “The Other Girl” and “Dream Junkies”, and the founder of the website Manhattan Chronicles. Alexandra is also a budding playwright and screenwriter, holds a Ph.D. in American Dramatic Literature in the last 30 years, and used to work as a theater critic for television and as a TV documentary producer and director. In all, Alexandra published 8 books in two languages, English and Romanian. Her novels have been translated in Romania where they hit the best seller lists and she was featured in Elle, Elle Book Club, Cosmopolitan and all the major glossy magazines and national newspapers. Her character driven novels are entertaining and thought-provoking. Her heroes are quirky, original misfits who question the status quo of pretty much everything. Ares deals with serious issues ---like estrangement, survival, reinvention, and fighting conformity---in a light hearted way.

Just stopping by to introduce myself and wish you a happy week ahead!