The Code 666 in the Book of Revelations Could Soon be Revealed.

Toward the end of the short video clip-In the very near future the government has decided as one option to begin the first three  prefix numbers of  forthcoming social security numbers to begin with 666.  Immediately my mind flashed to the Book of Revelations.  I found out the Chapter and verses in The Book of Revelations.  It can be found in Chapter 13: versus 16-18 which says that people will not be able to buy or sell without bearing the mark of the devil. Check it out for yourself. I know that it also states that the mark will be on the hands or the foreheads.

Identification possibilities of the future is to insert a small micro-chip under the skin or finger, also, the idea of the forehead has been mentioned  that a UPC number code which could eliminate the use of  checks,credit cards,  passports, and ID papers.

Sounds a little farfetched, but it is possible. I have worked with companies who now use eye, hand, and fingerprint technologies for security protection.

THE CODE OF 666 HAS BEEN KNOWN TO ME SINCE 2002. I HAVE WRITTEN ABOUT IT ON HUNDREDS OF SITES. "CHRISTIAN" MINISTERS ARE PAGANS IN CHRIST EYES AND HE HAS NOTHING TO DO WITH CREATION OF THE FALSE CHRIST SOLD ON TV USED TO DECEIVE THE CHILDREN WHO THINK THEY CAN BRIBE THEIR WAY INTO HEAVEN.

I WILL NOT WASTE TIME WITH PEOPLE WHO THINK THEY KNOW IT ALL.

90% OF AMERICA WILL BE DEAD OR DYING MOST "CHRISTIAN" MINISTERS WILL WISH THEY WAS BARTENDERS INSTEAD OR THAT THEIR MOTHER HAD ABORTED THEM.

HAVE A NICE DAY, EDWARD CALLED ENOCH BY THE LORD JESUSE CHRIST. 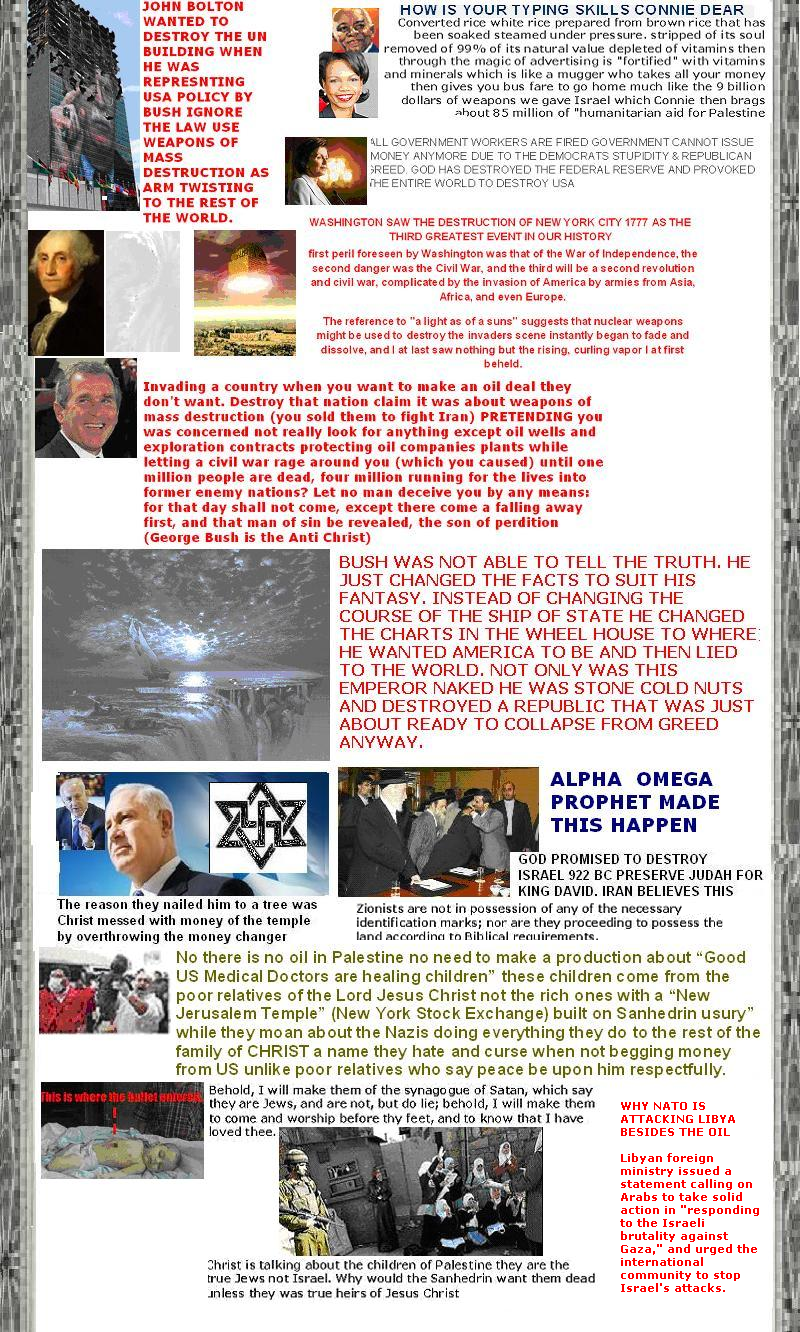 Christ had to pick someone to be his rod of iron. He never would pick any of these religious leaders because they are all liars, frauds, thieves, rapist, murderers, and unbelievers in anything except the corrupt system giving the property, power, money and the first place at the table in government operations.


"Imminent collapse of the U.S. Government finances possibility of Civil War inside the United States as a result of the collapse advance round-ups of 'insurgent U.S. Citizens' likely to move against the government detention of those rounded up at The REX 84 Camps constructed throughout the United States possibility of public retaliation against members of Congress for the collapses location of safe facilities for members of Congress and their families to reside during massive civil unrest."

Telling the truth was all it would take to save the 10% left God does not destroy for any chance of collecting from the hidden book.

I prayed for the paid religionist and rulers in the American government and all the parasites who raped, rob, stole, murdered for a few miserable dollars.


I pray diligently that they all be alive when Christ returns I don't want them in hell. That would be too kind for them. I want them to know what they threw away as strangers who hid in storage containers on ships to get to America move into the million dollar homes they now clean as the Meek inherit the earth.

Mega death is about to start Christ is returning. Christ promised half of all life would be dead. You will no longer own any property. Lucifer deceived you. His banking system rules Earth which belongs to God already set up the Kingdoms of Christ America as it exist now will not enter only 10% will be left alive all will believe everything I wrote because it will be basis for property ownership.

For we wrestle not against flesh and blood, but against principalities, against powers, against the rulers of the darkness of this world, against spiritual wickedness in high places.

I told Prime Minster Sharon “God would give Israel a New Prime Minister” If he obeyed God he would not have such a Bad Headache While being a human vegetable.

When Herod the king had heard these things, he was troubled, and all Jerusalem with him. And when he had gathered all the chief priests and scribes of the people When the MASHIYACH, the Son of the living EL. returns their will be hell to pay. 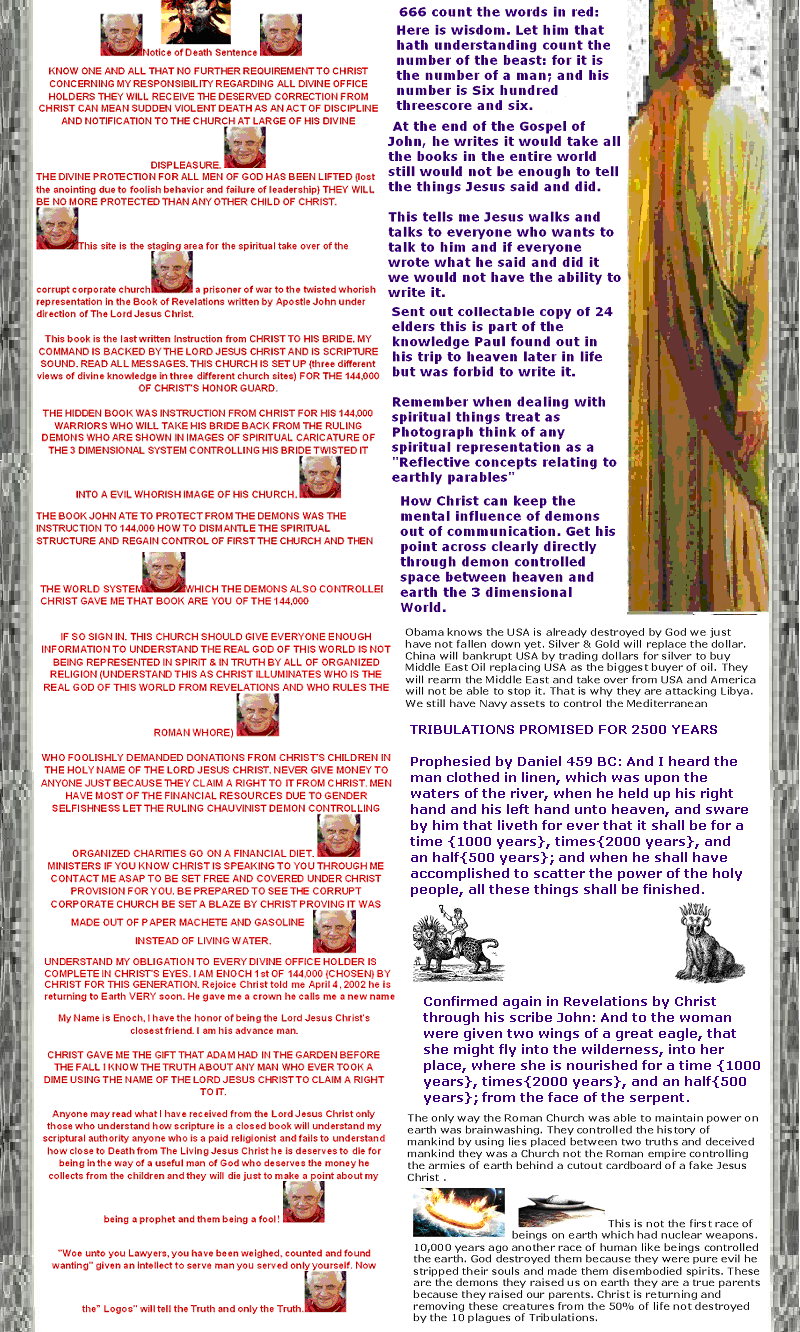 Good discussion to start. This may be one of the most misconstrued passages in the Bible. On very close observation and reading more than a few verses, one notes that 666 is the number of man. This means he is incomplete and belonging to the unholy trinity found in the previous chapter (12). It says, "Mark of the Beast ( one of the 3.) On the other hand, way back in Deuteronomy 6-8, God's people are to mark themselves with the Commandments of God. That which is indicated in both instances is a marking of the mind and an ideology (or way of thinking.) Man pretty much does as he thinks.

In sports a team member is known by the shirt he is wearing and his stated loyalty. The same holds true for the Bible and which team we are on.

Oops, sorry, I tend to write books once I begin.

I find the responses here very interesting. I explored this topic and ended up writing a 411 page allegorical novel (illustrated in color), and how this could happen. It should be noted that I had a calling from God to write "Littluns" designed to appeal to both Christian and secular, Young Adult, and adult readers. For those who have read "Littluns" (see reviews at http://www.littlunsblog.com) their reaction and the awards won are more than I could hoped for. The award winning book is “Littluns: And the Book of Darkness”.

Still it seems that most people are turned off presumably because of the Christian content and maybe the allegorical and animation presentation of it all in “Littluns.” or even the Book of Revelation itself. Perhaps it’s just simply because most people spend their time on the internet in exchange for taking the time to read a good book. Nevertheless, it is important to note that I never aspired to be an author and "Littluns" would never have happened if God didn't ask me to write it. So whatever happens, I know that His way will be perfect with whatever He has in mind.

Reminiscent of Noah, the fact is that most people will not see this happen until it does and then, of course, it will be too late.

Because the numbers can be inverted with a completely different meaning, 999 representing good and 666 the evil within, it will be difficult to know who is what. As an example, using the Bible Code where numbers are assigned a number, A=6, B=12, C=18 and so on through the alphabet, Barack Husain Obama's first, second and third names = 999, which could be inverted. It’s also interesting that his middle name Husain can be spelled two different ways but still = 6. Also, the word Computer and Mark of Beast = 666. The Bar Code has three thick bars located far left, middle, and far right on everything you buy. Each of those thicker bars have the number 6 attached to them and together = 666.

See in Revelation, 13:18 “This calls for wisdom: let him who has understanding reckon the number of the beast, for it is a human number, its number is six hundred and sixty-six”.